An interesting picture, shared by the U.S. Air Force, shows a Reaper UAS (Unmanned Air System) on the ground at Kandahar airbase, with two interesting pods.

The image in this post (that we’ve edited to highlight the detail of interest) was released by the U.S. Air Force.

Noteworthy, one of the Reaper drones (that are launched, recovered and maintained from Kandahar and remotely operated by pilots in bases located in the U.S.) carries two Electro-Optical/Infrared (EO/IR) sensors under each wing. 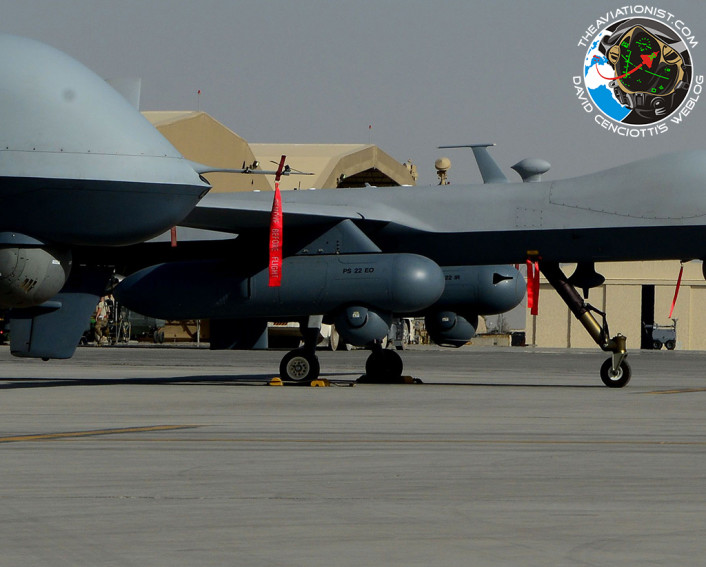 These could be the latest version of the rarely seen before Gorgon Stare (formerly known as the Wide Area Airborne Surveillance System – WAAS), a pod-based sensor package used to track people, vehicles, and objects in areas of +10 square kilometers.

Usually, a Gorgon Stare system is made of two pods, one carrying networking and communications equipment, the other with Visible/IR Camera Arrays and Image Processing module: interestingly, the MQ-9 shown in the picture carries two seemingly identical pods (with EO/IR turrets).

Most probably, the second one, even if images released so far show different kind of pods.

On Sept. 5, General Atomics Aeronautical Systems, Inc. (GA‑ASI),  announced the successful first flight of the MQ-9 Block 1-plus. The new version of the world’s most famous drone has taken place on May 24, at […]

What’s It Like to Be Inside the USAF Thunderbirds “High Bomb Burst Cross”.