One of the few (if not the only) video showing a Harrier Jump Jet (nose) gear up landing on USS Bataan.

Here’s something you don’t see every day.

USS Bataan was operating in the U.S. 6th Fleet area of operations to augment U.S. Crisis Response forces in the region when Mahoney took off from the amphibious assault ship.

As he was climbing away from the deck he suddenly realized he had a gear malfunction. He immediately slowed down in order not to overspeed the landing gear, returned above the ship at 2,000 feet and started talking to “Paddles” (LSO – Landing Signal Officers), a pilot in the control tower who could provide assistance by radio. 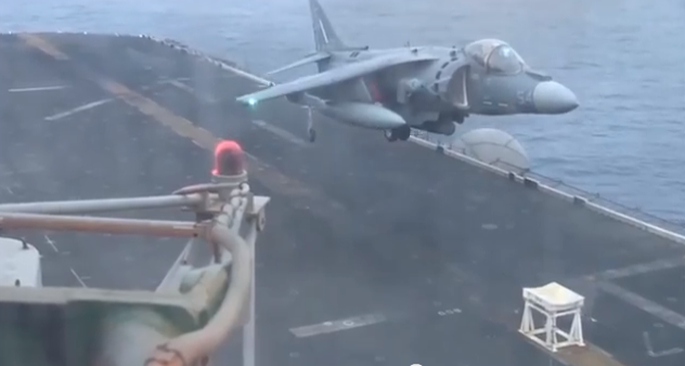 The Harrier flew the approach at 300 ft so that the LSO could see the landing gear and give some guidance to put the nose on a tool the ship has for this kind of issues: a sort-of stool.

Since there’s no way to train to land in this kind of situation, the pilot had to fly a perfect vertical landing, using the ship lighting system and the help of LSO on his first attempt.

Luckily, he stabilized at 20 feet and managed to land in the proper spot as shown in the video (that, weirdly, was removed by the Commander, U.S. Naval Forces Europe-Africa/U.S. 6th Fleet feed that had published it; luckily, we found it again and reuploaded it since it is unclassified and released as you can see in the first frames of the footage).

A U.S. Marine Corps Osprey that was supporting the first known counterterrorism operation under President Trump crash-landed in Yemen. It was later destroyed by U.S. raid. Early in the morning on Jan. 29, one American […]

Manned and unmanned aircraft have taken part in the air strikes launched on Aug. 1, against Daesh targets around Sirte, in Libya. On Aug. 1, the U.S. launched a new round of air strikes against […]