On Feb. 26, Air Force Secretary Deborah Lee James revealed the first artist rendering of the Long Range Strike Bomber, an aircraft built by Northrop Grumman and designated the B-21, at the Air Force Association’s Air Warfare Symposium in Orlando, Florida.

The aircraft, that was not given a name yet, is going to be the first stealth bomber of the 21st century: it will supplement the B-52, B-1 and B-2, with the latter (another Northrop Grumman design) sharing much resemblance with the future LRS-B.

In particular, the aircraft seems to be designed around a standard flying wing: neither a “cranked kite” nor a kite like those seemingly spotted over the Wichita and Amarillo back in 2014.

As you probably remember, on Mar. 10, 2014 Steve Douglass and Dean Muskett took the photographs of three mysterious planes flying at very high altitude over Amarillo, Texas.

About one month later (on Apr. 15), Jeff Templin shot a triangular plane over Wichita Kansas.

Among the theories around both episodes there was the one that the aircraft were LRS-B prototypes. But according to what was unveiled earlier today there no prototypes of the next generation stealth bomber and its shape is going to be much different from that of the aircraft flying at high altitude over the U.S. in 2014.

Hence, the mystery around those sightings remains. 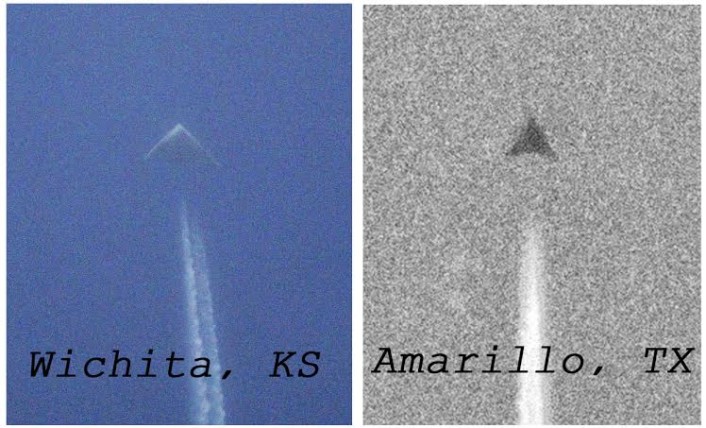 Image credit: Sammamishman based on Muskett and Templin shots

“The platforms and systems that made us great over the last 50 years will not make us great over the next 50,” Air Force Chief of Staff Gen. Mark A. Welsh III said during his testimony on Capitol Hill Feb. 10. “There are many other systems we need to either upgrade or recapitalize to ensure viability against current and emerging threats… the only way to do that is to divest old capability to build the new.”

There are no existing prototypes of the B-21, most of its capabilities are still unknown even though the aircraft is (obviously) believed to embed cutting edge technologies and sensors and to be cyber-resilient against the threats of the future interconnected world.

The artist rendering released on Feb. 26 is based on the initial design concept: this means the actual plane may be considerably different.

The Air Force plans to field the initial capability of the aircraft around 2025.

A short clip brings you inside the cockpit of a B-52 strategic bomber flying a nuclear alert training sortie. And one of the coolest things is the scene showing a pilot wearing the PLZT goggles. […]

This is how the cockpit of a C-17 Globemaster III aircraft looks like at night The image in this post was taken as Capt. Erica Stooksbury, C-17 pilot with the 816th Expeditionary Airlift Squadron, adjusted […]