The images they took showed what looked like an almost boomerang shaped plane, equipped with two engines (or at least two exhaust nozzles).

Noteworthy, something quite similar was spotted in February this year in Wichita, Kansas.

As reported by KSN, Jeff Templin, an amateur photographer who was taking pictures of wildlife back in February, shot a silent triangular shaped plane leaving what looked like an unusual contrail.

The top image is a crop of the photo Templin took from the ground back then.

Is this the same plane spotted over Texas by Douglass and Muskett or is it just a B-2?

Even though we can’t be 100% sure, the above image (click here for a higher resolution version) doesn’t seem to show a B-2 Spirit, even if the shape can be distorted by reflection, distance, and several other factors.

Provided it is really a new black project, there are several theories about the role of the mysterious triangular/boomerang shaped plane: some believe it could be an RQ-180 stealth drone or, more likely, a prototype of the American next generation LRSB (long range strike bomber).

Updated: user Dayanx on Reddit, filtered the image and highlighted the possible shape of the aircraft. Don’t you think it’s quite similar to the shape I created with Ugo Crisponi from the first blurry images taken at Amarillo? 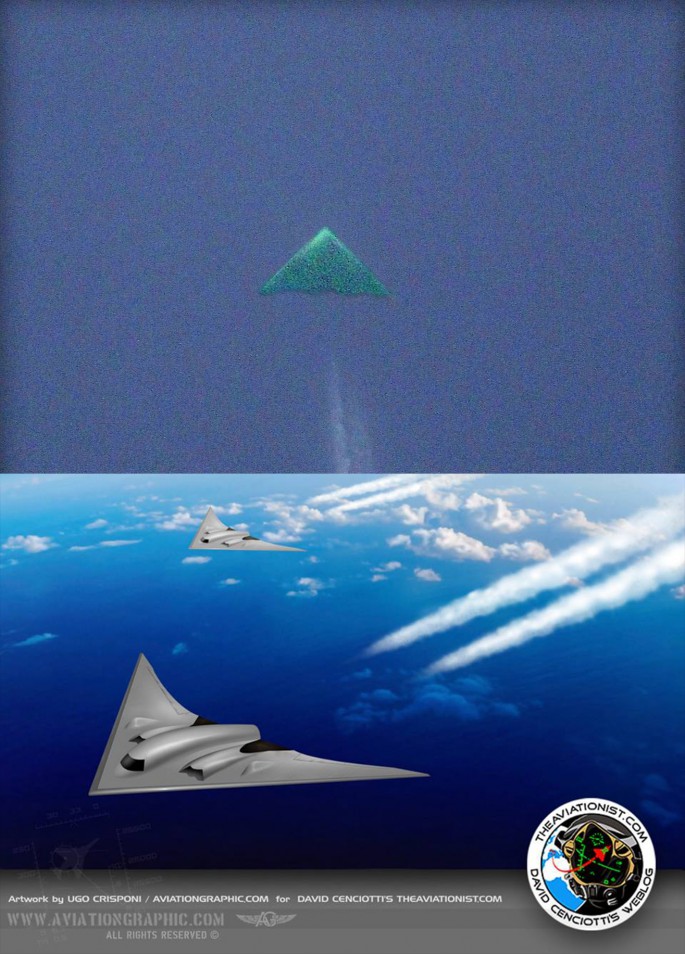 On Sept. 13, two B-2A Spirit stealth bombers out of Whiteman Air Force Base, Missouri, flew a round-robin mission across the Atlantic. What someone saw as a rehearsal of an eventual air strike on Syria, […]