Steve Douglass and Dean Muskett were taking photos at Amarillo when they spotted the contrails of some mystery aircraft. What did they shot flying over Texas?

The images you can see in this post were taken in the afternoon of Mar. 10, 2014. Steve Douglass and Dean Muskett, along with other fellow photographers were at Amarillo International Airport when they saw the contrails of three high flying aircraft.

Even though the aircraft were barely visible at distance, the photographers pointed their lenses at the unidentified planes, and took several shots. 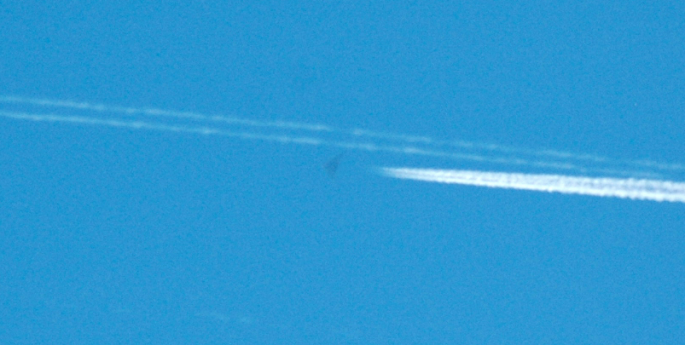 As Douglass recalls in his blog, it was only when they reviewed the images that they noticed that the aircraft were not B-2s as they initially thought: “At one point the aircraft had banked and the trailing edge was quite clear. It wasn’t straight but had a slight curve, the aircraft was almost boomerang shaped.”

Indeed, an inquiry to Whiteman Air Force Base has ruled out the possibility that a flight of three B-2s was flying over Texas on Mar. 10.

Stealth expert Bill Sweetman and the rest of the AW&ST team have investigated the mystery aircraft sighting, coming to the conclusion that the photos show something real.

Even if its shape loosely resembles that of an X-47B, the mystery aircraft seems to be larger than Navy’s new killer drone.

Obviously someone will argue that exposing three Black Aircraft in plain daylight is not that smart, especially if you want to keep the project classified.

Unless, you think the moment has arrived to show some potential resurgent enemy (Russia?) that you have an ace in the hole, as done some 30 years earlier with the F-117.

We Visited “Jedi Transition” to Learn If the Best Low-Flying Area in the U.S. Is in Danger. It is the African big game safari, the Mt. Everest and the Louvre of plane spotting: the “Jedi […]