An Alaskan Raptor suffered a landing accident at Hawaii.

A U.S. Air Force F-22A Raptor, belonging to the 3rd Wing from Joint Base Elmendorf-Richardson, Alaska, deployed to the Hawaii to take part in the Sentry Aloha exercise, had an incident landing at Joint Base Pearl Harbor-Hickam, in Honolulu on Jan. 14.

According to the few information available at the moment, the left main brake overheated and caught on fire after the Raptor landed on runway 08L.

HNL Rare Birds website published the image of the F-22 in fire suppressive foam: the runway remained closed for most of the day as maintenance personnel worked on the stealth jet.

According to the ATS website, it will take 30 days for a depot team to inspect the aircraft, and a decision to be made as to whether the aircraft is fixable. 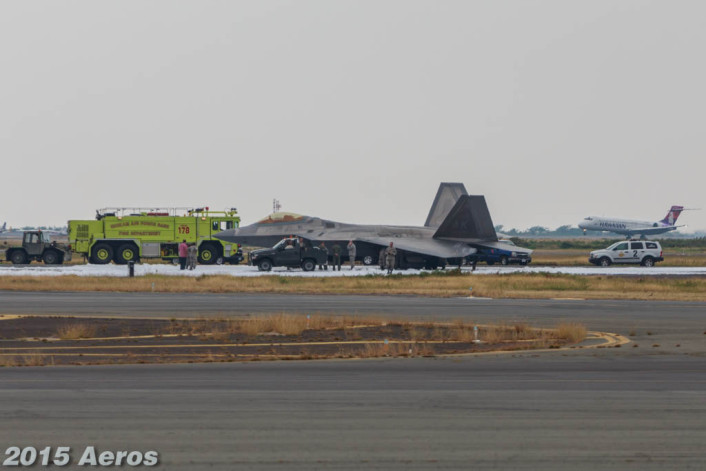 Image above credit (click on the image to open it at full resolution): HNL RareBirds

This was not the first time a Raptor suffered a landing mishap at the Hawaii: an F-22 Raptor, assigned to the 199th Fighter Squadron, Hawaii Air National Guard, sustained 1.8 million USD in damage in a landing incident at Joint Base Pearl Harbor – Hickam, on Dec. 7, 2012.

Cockpit Video From Inside A U.S. Air Force B-1B Lancer As The bomber Is intercepted Over The Baltic By A Russian Su-27 Flanker

The Su-27 intercept as seen from the cockpit of the B-1B bomber over the Baltic Sea. Our friends at Air Forces Monthly have obtained a pretty interesting footage: filmed from inside the cockpit of a […]