RAF’s legendary Squadron disbanded 71 years after famous raid over Germany. Will reform and get F-35s in a few years.

Royal Air Force’s 617 Squadron known as the “Dambusters”, from the daring night missions against the Mohne, Eder and Sorpe dams, pivotal to Hitler’s industrial heartland in the Ruhr Valley, back in 1943, completed their last operational mission (over Afghanistan) with the Tornado GR4.

It will be a temporary disbandment though: the unit will reform in 2018, with both Royal Air Force and Navy personnel and it will be equipped with the F-35B Lightning II joint strike fighter.

This last flight was a Close Air Support (CAS) mission, which aimed at helping the coalition troops and was made by Squadron Leader, Mark Jackson.

The Dambuster played recce and CAS roles during their stay in Afghanistan, tasks that were handed over to No II (Army Co-operation) Squadron from RAF Marham.

The statistics of Dambusters’ last tour in  Afghanistan are astounding: the Squadron accumulated 188 missions and logged more than 1500 flying hours.

In the article published on the RAF website Mark Jackson said:

As I stepped down from the aircraft for the last time, my emotions were mixed. Tinged with sadness is an overwhelming sense of achievement for what the Squadron have accomplished. I am sure that the original Dambusters felt a similar poignancy at the end of their iconic raid and would echo how very proud I am of those that serve today.

One of a few interesting tasks the Dambusters performed was the show of force; 14 ones were conducted on their stay in Afghanistan.

What is it? It is basically flying fast and low to deter enemy forces from attacking coalition ground troops. In this way the Squadron paid tribute to its early days, when low level flying was needed to sneak close to the German dams.

Jackson reminisces, that it is nothing compared to the raids back in 1943, since then, the bomber pilots “came back from their mission pulling out bits of trees and twigs from the aircraft, they were literally skimming the trees to get there.”

The Dambusters are to be officially disbanded in March, but then there is a plan to reform the unit as the the RAF’s first Lightning II Squadron in 2018, provided all the problems with the American STOVL (Short Take Off Veritical Landing) stealth jet will be solved by then.

In this way the legacy will be maintained. Wing Commander Arthurton is waiting for the Dambusters to come back, as he says: “the spirit and ethos of this famous Squadron will no doubt endure as it embarks on the next chapter of its illustrious history.” 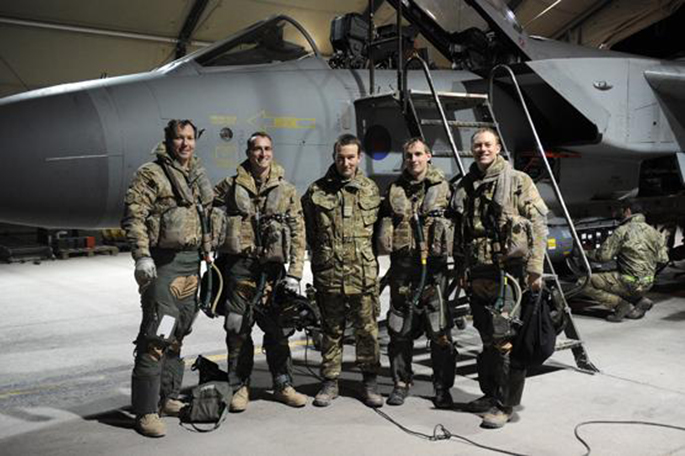 Previous debriefings: Day 1 Day 2 Day 3 of Operation Odyssey Dawn showed how the air campaign in Libya has entered the “mobile SAMs hunt” phase. This is what the increasing number of sorties by […]

Photos of 10 Russian warplanes intercepted by RAF Typhoons over the Baltic Sea….in one sortie!