The RAF has recently announced that its highly acclaimed Tornado Role Demo Display Team is to return to the UK Air Show circuit for 2013.

The two-ship display team using radio callsigns Poker 1 and Poker 2 provides a display that shows the British public the RAF’s frontline strike capabilities and tactics used by aircrew of the Tornado GR4 bombers deployed to the Afghanistan theatre of operations in the Close Air Support (CAS) role.

The display is fast, loud and dynamic, with large explosions from the pyrotechnics as the unfolding scenario is acted out via a commentator. 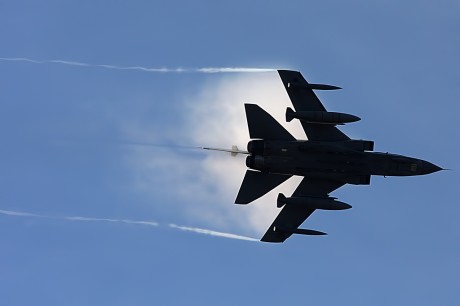 The scene is set as coalition troops are pinned down by an enemy firefight. The GR4s enter flying fast and low, wings swept, re-heat plugged in, as they provide a 550 kts “Show of Force.”  The ensuing fight includes Brimstone attacks and strafing runs, that give the viewing crowd heat and percussion from the explosions that can even be felt in the aircraft. 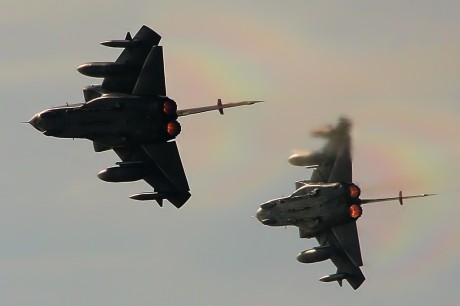 Flown by aircrew from XV (15) Squadron based at RAF Lossiemouth, whom are all Iraq and Afghanistan experienced aircrew the team have proved to be very popular with Air Show crowds during 2012.

Amazing color scheme for this IX(B) Sqn “Tonka” at RAF Marham. With the arrival of the first F-35B Lightning 5th generation aircraft, the Royal Air Force prepares to retire one of its most important and […]

Royal Air Force 207 Squadron Returns to the U.K with 6 F-35B Lightning Jets (Some Of Those Sport New Tail Markings)

The squadron will now reform as Operational Conversion Unit for F-35B pilots in the U.K. On July 16, 2019 the Royal Air Force 207 Squadron returned to RAF Marham in the UK. The squadron was […]

Everyone knows Princess Juliana Airport in St. Maarten, the Caribbean island: essentially, planes on short final for landing pass on top of beach goers on Maho Beach, that is always floodeed with tourists and photographers. […]