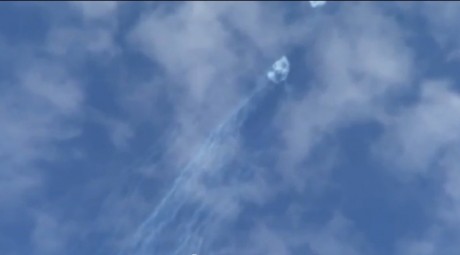 The Mil Mi-25 Hind gunship (capable to carry rockets that can theoretically be loaded with chemical agents) can be clearly seen releasing  bombs leaving fanning smoke trails. Although the resemble flares, these are actually ZAB submunitions igniting upon dispersal, and falling near Deir ez-Zour.

Such subminutions are contained into RBK-250 cluster bombs.

The Syrian regime is using its gunships to fire rockets, drop barrel bombs, PSYOPS leaflets, and even cluster bombs. That’s why they are the priority target of the rebel’s anti-aircraft fire.

According to the Pentagon, U.S. and Russian combat planes have had some tense moments over Syria. There have been several close encounters between Russian and U.S. and allied manned and unmanned aircraft over Syria since […]