Brought to my attention by Matt Fanning on The Aviationist FB page, the following HD video is one of the few clearly showing a Syrian Mig-23BN attack plane during a strike mission on Darayya, in southwest Syria.

Noteworthy, at the 00:26 of the video, the Russian bomber drops what seems to be a parachute-retarded ODAB-500 thermobaric bomb before egressing the target area at high speed deploying flares to deceive IR missiles like the one  that hit a Mil Mi-17 Hip gunship lately.

2.280 mt in length and 500 mm in diameter, the ODAB-500 is a 500 kg weapon developed by Russia for use against troops, light armored vehicles, parked aircraft and other soft targets. 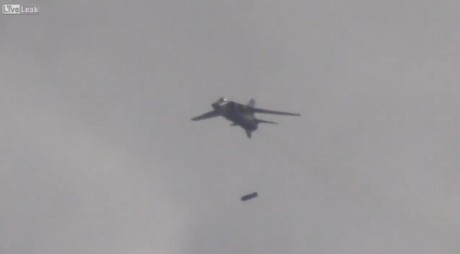 U.S. drones and spyplanes involved in information gathering missions over Syria. As in Libya one year ago. More or less…

More or less one year ago, we were observing an increasing activity of U.S., British, French and Italian military spy planes perfoming information gathering missions along the northern border of the Tripoli FIR (Flight Information […]