One year after a U.S. stealthy RQ-170 Sentinel drone was captured near the city of Kashmar, some 140 miles (225km) from the Afghan border, after it had violated the Iranian airspace on a spying mission from Kandahar airfield, in Afghanistan, looks like Tehran has captured another U.S. robot.

Indeed, IRGC released footage of the captured drone that, just like the RQ-170, seems to be in quite good shape.

The ScanEagle is a tiny low-cost robot with a 10ft wingspan built by Insitu, a subsidiary of Boeing. It can stay aloft for more than 20 hours, at a cruising speed of 60 knots. It is equipped with a stabilized turret system containing electro-optical and IR (Infra-red) cameras that can provide real time video feeds to operators in a ground control stations within a range exceeding 100 km.

It is runway independent and it can be catapulted from ships. Indeed, it can be launched autonomously via a pneumatic wedge catapult launcher and flies pre-programmed or operator-initiated missions guided by GPS and its onboard flight-control system.

At the end of the mission, it is retrieved using a “Skyhook” system in which the UAV catches a rope hanging from a 50-foot high pole with a wingtip hook. 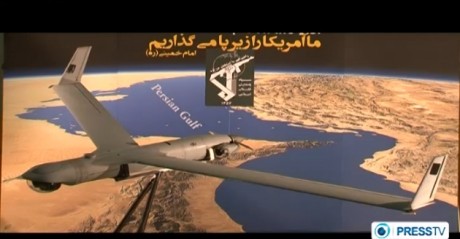 Referring to the captured ScanEagle drone, Brigadier General Amirali Hajizadeh, the commander of the Aerospace Division of the Islamic Revolution Guards Corps (IRGC), said that the drone was hijacked by Iranian forces as it was flying an ISR (Intelligence Surveillance Reconnaissance) mission around Kharg Island, in southern Iran.

Last month, two Iranian Su-25 jets tried (and failed) to shoot down an U.S. MQ-1 Predator that had violated the Iranian airspace over the Persian Gulf.

Although it’s unclear how the Iranians put their hands on the ScanEagle (the U.S. Navy denies it has lost any drone lately), this new episode proves that:

1) U.S. spy robot activity inside Tehran’s airspace is quite intense and involves several different platforms, from the batwing RQ-170, to the Predator, to the small ship-launched Scan Eagle.

2) Intelligence gathering missions take place both along the eastern and western borders of the country.

3) In a way or another one, Iran is either lucky to recover crash landed drones with minimal damage or surprisingly proficient at identifying, tracking and possibly hijacking such drones.

Do you remember the Iranian stealth jet that was unveiled in 2013 and looked like a fake plane? Well, it would be in the final stages of production according to Tehran. Little more than 4 […]