According to the CNN, that was the first to report the story, on Nov. 1, two Iranian combat planes tried to shoot down a U.S. Predator spyplane off the coast of Iran.

The American MQ-1 was flying a routine surveillance flight in international airspace some 16 miles off Iran, when, according to U.S. officials, it was approached by two Iranian planes that opened fire against it with the onboard guns.

Since the drone cameras captured the incident, the officials identified the attacking planes as two Su-25 Frogfoot bombers.

Even though the Iranian pilots continued to fire shots on several firing passes, none of them hit the Predator, that safely returned to its homebase.

So, summing up, two Iranian planes deliberately attacked a U.S. unmanned aircraft in the Persian Gulf, and missed it.

What’s weird in this story?

First of all, the type of platform used to intercept the drone. The Su-25 is not fighter jet. It is the Russian equivalent of the A-10. The Iranian Air Force does not operate any of such planes. The Iranian Revolutionary Guards Corps Aerospace Force (former Islamic Revolutionary Guards Corps Air Force) has added seven Iraqi Air Force Su-25s that fled to Iran in January 1991, during Operation Desert Storm.

Although this is far from being confirmed, no more than 16 Su-25s (between former Iraqi and new ones) are believed to be based by Tehran at the base of Shiraz, in eastern Iran (not far from the Persian Gulf). How many of them are airworthy is still an open question. Some believe the lack of spare parts and pilot training has sensibly reduced the amount of flying hours available with the Su-25.

Surely, two were spotted flying at the beginning of 2012. Were those involved in the recent incident? Maybe there are a few more available, even if it must be noticed that, with all the aircraft in IRIAF (Islamic Republic of Iran Air Force) the Frogfoot is the less likely asset to be used to intercept a hostile aircraft. Especially on the eastern coast, where Iranian air defenses should be on a heightned alert status for a possible Israeli/US attack.

Second weird thing is that the “interceptors” were armed. If they were involved in a training mission and caught the drone almost by accident, they were most probably unarmed.

I don’t find much odd the fact that they missed their target. As said the Su-25 (provided this kind of plane was really involved in the incident) is a bomber. As such, its pilots does not train that much in air-to-air gunnery. Even if a flying Predator might appear as an easy target, don’t forget that you need a certain amount of training to shoot down another aircraft, even when you are flying on a hi-tech fighter.

Do you remember the Israeli F-16 that had to fire two air-to-air missiles at the drone that had violated the Israeli airspace last month?

Still, the Su-25 is not a fast jet and it maneuvers quite well at very low speed, hence attacking a slow mover should not have been a factor. On the other side, it’s unclear why the Iranians would not dispatch other higher performance fighters if they really wanted to down the drone. Did the Su-25s only fire some warning shots to the Predator?

Most probably, more details will emerge in the following days. 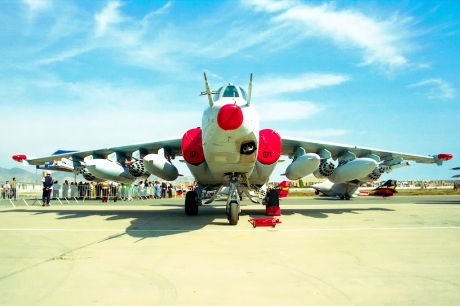 About David Cenciotti 4322 Articles
WebsiteFacebookTwitterLinkedIn instagram
David Cenciotti is a freelance journalist based in Rome, Italy. He is the Founder and Editor of “The Aviationist”, one of the world’s most famous and read military aviation blogs. Since 1996, he has written for major worldwide magazines, including Air Forces Monthly, Combat Aircraft, and many others, covering aviation, defense, war, industry, intelligence, crime and cyberwar. He has reported from the U.S., Europe, Australia and Syria, and flown several combat planes with different air forces. He is a former 2nd Lt. of the Italian Air Force, a private pilot and a graduate in Computer Engineering. He has written four books.

This Infographic says it all you need to know about Putin air war in Syria. Prepared by CIGeography‘s Louis Martin-Vézian for the Offiziere.ch, the infographic in this post shows the evolution of Russia’s intervention in […]

According to a senior Iranian commander, several reconnaissance aircraft, including some U-2 spyplanes, have been frighten away by Tehran air defenses as they flew close to Iran’s airspace. On Dec. 22, General Shahrokh Shahram, Lieutenant […]