On May 16-17, UK’s Royal Air Force celebrates the 70th anniversary of one its most famous raid in RAF history: the Dams raid conducted by 617 Squadron.

The “Dambusters”, half of those never returned from the raids, were honoured with a dramatic tribute: on May 15, a Lancaster from RAF’s Battle of Britain Memorial Flight,  performed three runs over the Derwent Dam that, back in 1943 was used by the 617 Sqn pilots to train in preparing of the daring night missions against the Mohne, Eder and Sorpe dams, pivotal to Hitler’s industrial heartland in the Ruhr Valley.

Below, an AP image of the Lancaster taken from the ground. 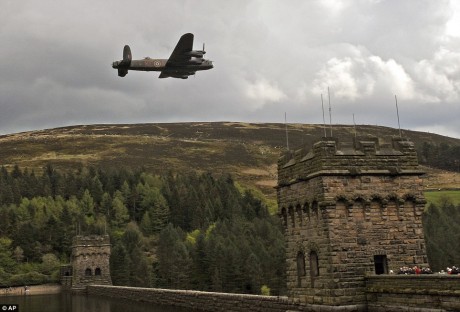 80 Years Ago, The Battle Of Britain, The First Military Campaign Fought Entirely By Air Forces, Ended