The following interesting picture depicts the first Tranche 3 Typhoon, destined for delivery to the Royal Air Force, during electromagnetic testing.

The aircraft, British single seat no 116, was injected with simulated threat signals directly into specially designed points on the nose, tail and wing tips, as part of the so-called Electromagnetic Compatibility (EMC) test.

Direct Current Injection technique, ensure that core Typhoon systems, including the armament, fuel and flight controls systems, possibly susceptible to radio frequency emissions from ground radars and/or TV and radio transmission masts, will be able to operate safely and correctly when exposed to intentional or accidental threats. 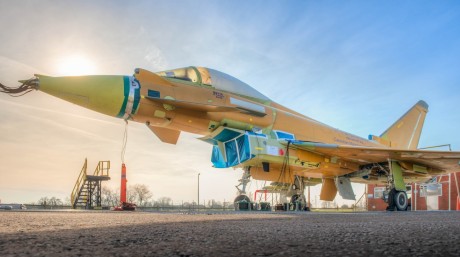 After completing the EMC testing, lasting several weeks, the aircraft will proceed on to engine ground testing.