Equipped with new P1E software, a Eurofighter Typhoon in a multirole configuration featuring both air-to-surface and air-to-air weapons (2 GBU-16 plus 1 Laser Designation Pod plus 2 AIM-9L plus 2 underwing tanks) recently conducted the first laser guided, self designating, simultaneous guided bomb drops: in other words, the European jet attacked and destroyed two different targets at the same time. 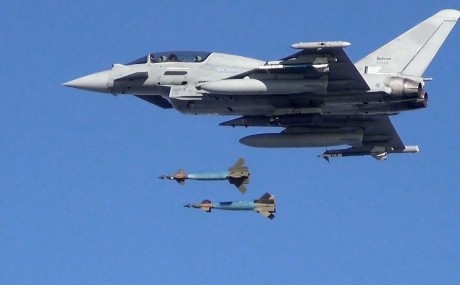 The tests were aimed at proving that the Typhoon is not only an air dominance fighter capable to achieve some F-22 kills in mock aerial combat during last year’s Red Flag Alaska, but is also an effective precision air-to-surface platform, as proved by the Libya Air War.

Future enhancement programmes will integrate even more weapon systems and capabilities to the aircraft such as Storm Shadow, Brimstone and the Meteor missiles.

Here’s another cool video. It was taken from the backseat of a two-seater Typhoon multirole jet fighter of the 29 Sqn of the Royal Air Force from RAF Coningsby involved in an ultra-low level mission […]