The last of the produced F-4 Phantom jets has been converted into a flying dummy target-drone for missile training.

The plane was a part of 309th AMARG (Aerospace Maintenance and Regeneration Group) based in Tuscon, Arizona and went through tests on Apr. 17.

Just after being prepared for flying in a form of a target drone it was given a name Last One. 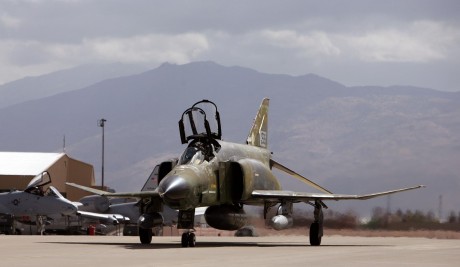 It is 316th QRF-4C (target drone designation for F-4) that was created. The conversion of the former MiG-21 adversary is conducted with the help of BAe Systems.

The aerial target drone will be managed by 82nd Aerial Targets Squadron based in Tyndall AFB.  The conversion itself is not a quick process, as it takes about 160 days which is almost half a year!

The QF-4 is created using the planes that sit on the USAF’s desert boneyard in Tuscon, Arizona.

As no Phantoms are left to be converted, the oldest F-16s are next in the queue  to be converted into dummy targets for training or new missile research. The first F-16 made its first flight in May 2012.

This is as far as the Air Force goes.

The US Navy is not using Phantoms anymore, as the last ones were also QF-4 target drones in service with Naval Air Warfare Center in Point Magu, California. The Phantom drones are expected to be a part of USAF target dummy inventory until 2013-2014 (later they will be replaced by the abovementioned F-16).

The QF-4’s not only serve a drone role, as several of  them are still painted in historical camo and take part in the USAF Heritage Flights at the airshows when not being used as targets.

When being a target, the QF-4 provides quite realistic training platform, as it can imitate all kinds of evasive maneuvers.

The following video shows practical application of QF-4 in training of the Air National Guard:

In the video we can see two F-15 jets shooting at the targets – the QF-4 Phantoms. To simulate the aerial combat with the highest possible fidelity the targets are equipped with the whole array of countermeasures (chaffs and flares) and may be flown remotely (when serving as a target) or with a pilot in cockpit (Heritage flights, maintenance). When unmanned, the QF-4 also carries an explosive device for self-destruct purpose in case it becomes uncontrollable.

Even if most modern air forces are equipped with more advanced fighter planes, the F-4 is still comparable if not superior to many enemy aircraft U.S. fighter could face in case of war….

Ever Seen A Drone Dropping Another Drone? Take A Look At The XQ-58 Valkyrie Releasing An Altius 600 UAS

This first payload release from an XQ-58 Valkyrie is part of the ongoing testing of the attritable unmanned aircraft and possibly related to Kratos’ involvement in the Skyborg program. The U.S. Air Force Research Laboratory […]

How The F-35 Demo Team Is Changing Minds About the Joint Strike Fighter Program.

Media Team Combines State of the Art Imaging with Messaging to Shift Opinion. For nearly a decade the F-35 Joint Strike Fighter program was fighting a dogfight it had to win against ill-informed public opinion […]