The following video shows what may have caused the crash of a National Air Cargo Boeing 747-400 shortly after take off from Bagram Airfield, in Afghanistan, on Apr. 29.

As we reported on our first article on the accident, there are rumours that radio frequency monitors listened a crew report according to which the load had shifted just prior to the crash. 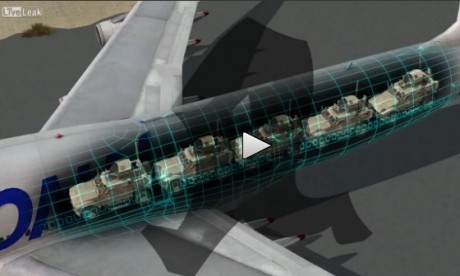 A sudden and violent shift of the CG (Center of Gravity) during initial climb, might have induced the impressive nose high attitude that is clearly visible in the shocking video recorded by a car dash camera.

At that speed and altitude, the aircrew could do nothing to recover the situation.

The animation below points towards the engine stall as the root cause of the crash; however, the wings stalled (they would stall even if the engines were working properly) and the aircraft almost fell from the sky like a stone.

U.S. airborne communication plane could be tracked on the Web for 9 hours during air strike that killed Taliban leaders in Afghanistan

At least seven Taliban militants were killed following a NATO air raid Afghanistan. Noteworthy, a sign of the developing operation may have been a U.S. Air Force E-11A BACN plane orbiting over southeasern Ghazni province, […]

Shindand (or Shindad), in Western Afghanistan, will be the future Afghan Air Force (AAF) main training facility. Today it is the base used by the young and quite small Afghan Air Force to train its […]