On the afternoon of Monday Apr. 29 a civilian Boeing 747 cargo plane taking off from Bagram Air Base, Afghanistan, crashed killing all on board.

The doomed B747-400 cargo plane was operated by National Air Cargo and thought to be the example carrying registration N949CA (unconfirmed).

The aircraft had been contracted out by the U.S. military and had arrived at the base the previous day. Eye witnesses said that the 747 had taken off normally but once it had reached an altitude of around 1,200ft the nose pitched up violently leading to a subsequent stall.

There are rumours that radio frequency monitors heard the crew report that the load had shifted just prior to the crash: the heavy cargo plane pitched up past the point at which the crew could not recover; the resulting drop in airspeed made the aircraft stall and that close to the ground there was nothing the crew could do.

National Air Cargo made a statement to Reuters by phone stating “We did lose all seven crew members,” although their nationalities have not been released.

The Taliban released a statement saying that they were responsible for the crash but ISAF (NATO’s International Security Assistance Force) said that there had not been any insurgent activity around or near the base when the incident took place, therefore it would seem the Taliban tried to use this as a bit of a publicity stunt. 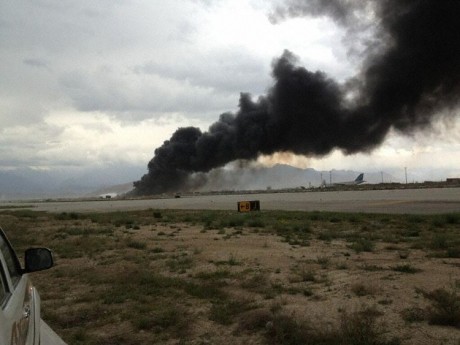 Italy's Reaper drones to be "weaponized"

Although it could take a year or more to complete the process, Italy’s Reaper drones could soon be given the official go ahead to procure the Hellfire missiles and laser guided bombs that Rome has […]

After 3 years, the “Warthog” returns to Afghanistan. A dozen A-10C Thunderbolt II ground attack aircraft have arrived at Kandahar Airfield, Afghanistan, on Jan. 19 to bolster (USFOR-A) and Afghan National Defense and Security Force’s […]