Threats include IEDs, and the Afghan rebels have Stinger ground-to-air missiles, remains of the Soviet-Afghan war, at their disposal. It is not a surprise then, that the Americans have been looking for a way which would make the logistic support easier, faster and first and foremost – safer.

Risking a loss of a helicopter in the war means not only that the expensive aircraft would end up in a scrapyard, it also means that the pilot, whose training costs a lot of money, would probably also lose their lives.

The risk of losing a pilot / aircraft should be minimized. This was the main idea that led to the development of UAVs, unmanned aerial vehicles which allow the armed forces to carry out recon or even combat operations with minimum risk of losing human lives.

When it comes to supplying Forward Operating Bases in the Afghan theater, convoys used to be the main means of support. Nevertheless, extensive use of IEDs and assymetrical methods of fighting on the side of Taliban forces made this tactical approach unsafe. Here is where the K-Max drone provides a solution; a pretty clever one.

The main aim of the K-Max programme was to create an autonomous cargo system for the Afghan theatre. K-Max drone, developed on Yuma proving grounds, is a solution that lets the Marine Corps, that are the main user, receive the supplies in many remote areas without risking losses in personnel. 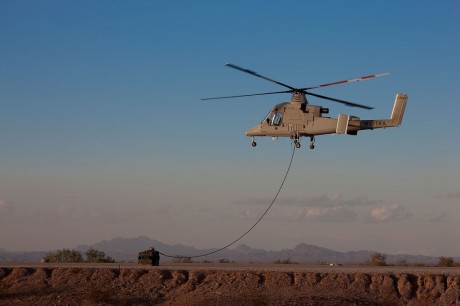 It must be remembered though, that K-Max was a manned aircraft, which was basically converted into a drone. It still features a cockpit and may be flown manually if needed.

The helicopter is a single purposed aircraft, whose main task is to lift and transport heavy cargo. The drone is able to carry up to 6000 lbs. of external load, what with the mass of 6000 lbs. is an outstanding achievement.

The design of the helicopter includes a counter-rotating rotor system, eliminating the need for a tail rotor, that simplifies the drivetrain complexity. Steering is achieved with the use of flaps mounted on the rotors. The peculiarity of these stems is that they are servo-mechanic, non-hydraulic system.

The drone was nominated for the 2012 Collier Trophy, considered to be the greatest benchmark in aviation. What is more, it won prestigous awards from Popular Science and Aviation Week magazines.

Here is a video which presents the K-Max’s practical application in the Afghan Theatre:

The concept has been proven so useful that the Marines extended the use of it in cooperation with Lockheed-Martin for an indefinite period of time on Mar. 18. 2013. Two aircraft of this type are currently stationed in Afghanistan.

Modern fighters: why so similar?

Let’s make it simple. According to aircraft designers (often accused of copying from other projects….), modern fighters are similar one another because computers model more or less in the same way the shapes required to […]

The Turkish Air Force has shot down an unidentified drone in Turkish airspace. Known and unknown facts.