The aircraft is built in the tilt-rotor technology, with rotors that can be rotated 90 degrees in order to change configuration from VTOL (Vertical Take Off and Landing) to conventional, similarly to U.S. CV-22 Osprey.

It differs from the American tilt-rotor aircraft in the way the tilting is achieved.

In the V-22 Osprey the rotors are mounted at the end of the wings; the Project Zero‘s rotors are located within the wings’ surfaces.

This gives the rotors a bit of ducted fans appearance, making the transition from vertical to horizontal easier – the ducting provides a bit of the lifting force.

The Project Zero is said to be unmanned and the date of first flight is unknown, even if some sources say it was last June, and some say it was in August 2011.

The first flight was tethered, with the aircraft connected to the ground. It is said it made a few secret flights during last year. 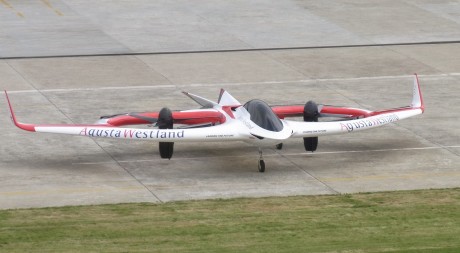 Daniele Romiti, CEO of AgustaWestland gave the only press statement that is currently available on the Internet saying:

This is a wonderful achievement of the AgustaWestland Advanced Concepts Group. A team of passionate and brilliant engineers worked extremely hard in a secure facility to conceive, design, build and test this technology demonstrator in an exceptionally short period of time,” said Dr. James Wang, Vice President of Research and Technology at AgustaWestland. “This group lives to dream, and if it can be dreamed, it can be built. The team did not just build an electric powered airplane or helicopter; that would have been too easy. They went all out and built a twin rotor electric tiltrotor with no transmission or swashplates.

There is little we know about this aircraft, but here’s what can be found:

The design follows a few trends that might be considered to be placed within the breaking grounds of the aviation nowadays.

Firstly, it is not powered by any combustion engine. The energy comes from battery power, however the official statement of the company does not exclude using hybrid power in the future with help of diesel engines.

A feature which may be interesting is that the aircraft does not use any hydraulics whatsoever. This eliminates the need for faulty fluid-operated on board systems.

The fuselage is a blended lifting body. Company officials claim that additional detatchable set of wings may be used in order to provide the lift for missions which will be carried out in the helicopter mode exclusively.

Steering is achieved through the use of elevons for pitch and roll in the horizontal mode, while the longitudinal stability is provided by a V-tail.

Since the aircraft is driven by electric power, the transmission is simplier.

Then it is possible for the machine to fly in heavily polluted conditions, or at extreme altitudes as, unlike traditional engines, no oxygen is required for combustion. This makes the aircraft a perfect vehicle for examining volcanic eruptions, similar to the one on Iceland in the year 2010 that stopped most of the air traffic in Europe.

Another interesting feature is that, when the aircraft sits on the ground, the blades may be pointed in the wind direction, recharging the batteries.

The aircraft is not Agusta’s first tilt rotor since the company has already designed the AW609, which looks similar to CV-22 Osprey, but has pressurized cabin and has a civilian purpose.

There is no information regarding the Project Zero’s purpose. It may be simply a technology demonstrator without any prospects.

It is not known whether Project Zero will evolve into manned aircraft. In the meanwhile, performance figures in the patent say that the aircraft can reach speeds of 500 km/h and a ceiling of 7,500 meters.

The AgustaWestland AW101, a new generation all-weather medium-lift three-engine helicopter is among the “main characters” of Skyfall, the 23rd James Bond movie, which premiered in London on Oct. 23, 2012. Known as “Merlin”, the large […]