Watch the helicopters blades coming dangerously close to the refueling hose as the pilots struggle to get in the proper position to plug the IFR (in-flight refueling) probe into the low speed paradrogue (or “basket”).

Ex. Angel Thunder is the world’s largest Personnel Recovery exercise providing the most realistic PR training environment available to USAF Rescue forces, as well as their Joint, Interagency, and International partners from Brazil to Uruguay. 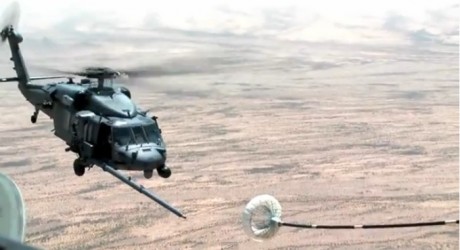 One of our readers has pointed an interesting detail he has found on Google Maps: the presence of a huge contingent of U.S. V-22 tilt-rotor aircraft in Kuwait. At least twice in the last months, […]