Among the (known) U.S. assets supporting the French Air War in Mali, there are some 100th ARW’s KC-135 from RAF Mildenhall (operating from Moron airbase, in Spain). 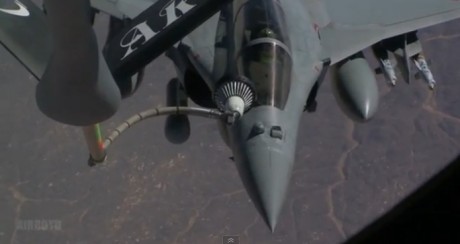 The following video brings you on board one of the aerial refuelers, as the flying boom-equipped tanker refuels a flight of French Air Force Rafale jets.

Jan. 13 saw the first involvement of the Rafale combat planes in the French air campaign in Mali. Four “omnirole” jets from Saint Dizier airbase, took off from their base and, supported by two C-135FR […]

Fully armed F-16 takes fuel from KC-135 at night. First videos of U.S. and allied partners air strikes on ISIS targets are being released. Here’s footage of an F-16 armed with AIM-120 AMRAAM and AIM-9X […]

The best part is when the gunship disappears into the night. The following footage was filmed from a U.S. Air Force KC-135 from the 340th Expeditionary Air Refueling Squadron as it refuels an AC-130W over […]