The following images show airmen from the 36th Expeditionary Aircraft Maintenance Squadron, deployed from the 23rd Expeditionary Aircraft Maintenance Unit, Minot Air Force Base, North Dakota, preparing a dummy AGM-86C Conventional Air-Launched Cruise Missile (CALCM) for loading on to a B-52 Stratofortress during a load demonstration at Andersen Air Force Base, Guam, Apr. 16, 2013. 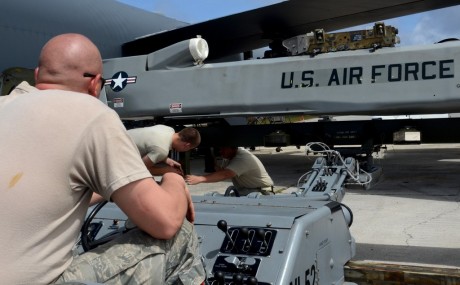 According to the U.S. Air Force, all EAMUs deployed to Andersen have to undertake and pass a load inspection within 10 days of arrival as part of a U.S. Pacific Command requirement to ensure all tools and equipment are mission ready. 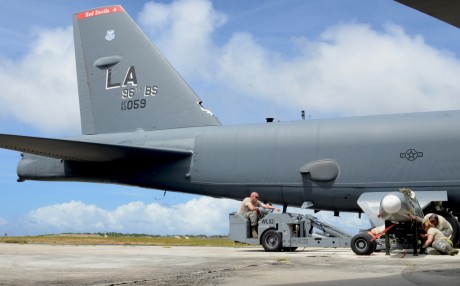 While tensions in the region escalate again following U.S. rejection of North Korea’s demand for nuclear status, Washington keeps its heavy bombers ready to be called into action should the need for a preemptive or retaliatory attack arise.

In the past weeks, B-52 and stealthy B-2 bombers have conducted extended deterrence missions over the Korean Peninsula following Kim Jong Un threats to launch a nuclear attack on the Continental U.S.

The Thule Air Base Broken Arrow incident. On Jan. 21, 1968, a B-52G Stratofortress belonging to the 380th Strategic Bomb Wing from Plattsburgh Air Force Base, New York, crashed in in Greenland in what is […]

The following interesting video depicts a B-2 stealth bomber from the 509th Bomb Wing, at Whiteman Air Force Base, Missouri, being refueled in-flight by a KC-135 on Jan. 23, 2013, over the Pacific Ocean. The […]

No traces of radioactive materials, including xenon gas, were detected following North Korea’s latest nuclear test. Here are the aircraft that helped determining that. On Sunday Aug. 3, North Korea conducted its sixth and most […]