Last month we published a stunning image showing a Hellenic Air Force C-130 flying with another plane of the same type, wearing the typical camouflaged color scheme still used by many Greek planes.

Even if most combat planes wear monochrome light grey paint jobs, camouflage color schemes, quite important for survival in certain scenarios, both in the air and on the ground, are still applied to aircraft flying with some quite exotic air forces.

Among them, the Royal Air Force of Oman.

In this picture, courtesy of David Bracci from Aviation Air Routes, a C-130J-30 of the RAFO landing at Pisa last month. 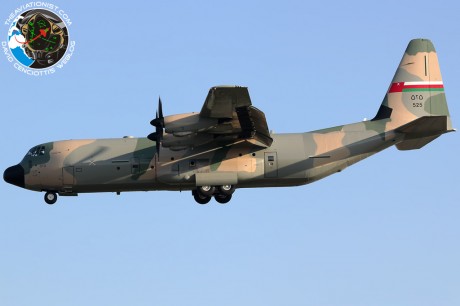 Camouflage color schemes: how many Marines can you count in this photo?

Camouflage color schemes are not only important for fighter planes’ survival in combat. The following image, released by the U.S. Marine Corps shows Marines with Scout Sniper Platoon as they mingle with members of Special […]

Libyan Air force to be re-equipped with Rafale and Typhoon multi-role fighters. And some U.S. planes too.

Interesting footage of a Cirrus ditching in the Pacific Ocean filmed by a U.S. Coast Guard C-130 Hercules. On Jan. 26, a Cirrus SR-22 plane on delivery flight across the Pacific from San Francisco Bay […]