Along with real pictures and videos of Syrian Arab Air Force planes and helicopters downed by the rebels, an increasing amount of fake footage and images has been spreading on the net, allegedly showing Assad fighters and choppers shot down by the Free Syrian Army anti-aircraft artillery fire.

Quite interestingly, alongside genuine and doctored material, there is also a certain number of genuine images, taken out of context: few weeks ago, several media outlets showed what they were told was a Syrian Mig hit by some MANPADS (Man Portable Air Defense Systems) or AAA fire.

The above dramatic image posted on Facebook with the aim to show a Syrian combat plane in fire after being hit by the FSA forces depicts a Russian Su-27 Flanker, performing at an airshow.

The aircraft is simply releasing some flares, high-temperature heat sources ejected from the aircraft’s dispensers to mislead surface-to-air or air-to-air missile’s heat-seeking targeting system: since the burn temperature is hotter than that at the engine’s exhaust the burning flares attract and decoyIR (Infra-Red) missiles fired at the aircraft.

See Chinese warplanes releasing them during an exercise at sea.

The following photographs, similar to the above one, show Russian Su-27s using lots of flares at the recent Russian Air Force 100th Anniversary airshow. 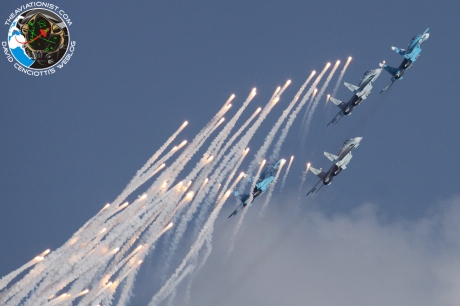 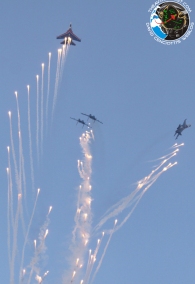 About David Cenciotti 4037 Articles
David Cenciotti is a freelance journalist based in Rome, Italy. He is the Founder and Editor of “The Aviationist”, one of the world’s most famous and read military aviation blogs. Since 1996, he has written for major worldwide magazines, including Air Forces Monthly, Combat Aircraft, and many others, covering aviation, defense, war, industry, intelligence, crime and cyberwar. He has reported from the U.S., Europe, Australia and Syria, and flown several combat planes with different air forces. He is a former 2nd Lt. of the Italian Air Force, a private pilot and a graduate in Computer Engineering. He has written four books.
Website

Pretty impressive footage of bombs falling from the sky. Beginning on Nov. 17, the Russian Air Force has started pounding ground targets across Syria using its heavy bombers: Tu-95MS, Tu-160 and Tu-22M. During the first […]

Many media outlets are reporting the fact that Syria is expecting a shipment of Mil Mi-35 attack helicopters which were in Russia for maintenance, and were being returned. The MV Alaed had picked up its […]