An article appeared in the ‘New Yorker’ (written by David Makovsky, a Jewish American who has lived in Israel for many years although now living back in the US) has revealed several previously unknown facts about the IDF strike code named “Operation Orchard”. The facts have allegedly come from conversations Makovsky has had with a dozen or so high ranking Israeli officials.

According to Makovsky Israel suspected that Syria had stepped up its nuclear program during 2006, and the intelligence they held at that time pointed towards a building in northeast Syria in the Deir al-Zour region.

What they needed was damning evidence that this was the case. According to Makovsky on Mar. 7, 2007 Mossad agents broke into the Vienna home of the head of the Syrian atomic agency Ibrahim Othman. It’s thought that the agents hacked into Othman’s computer and copied three dozen photos from the hard drive: among them, color photos taken from within the facility. 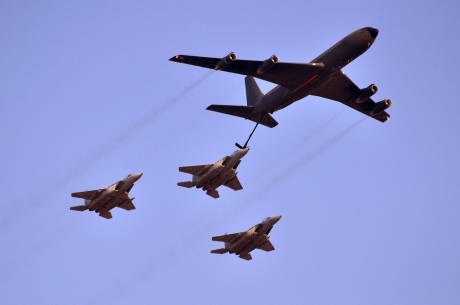 The images are thought to have shown images of North Korean workers which corroborated Israel’s suspicion that Pyongyang was building a plutonium reactor for the Syrians.

The following day Mossad director Meir Dagan met with the then Prime Minister Ehud Olmert. During their meeting, Dagan presented the findings to Olmert and explained the PM that they needed to act quickly as there would be a risk of radioactive contamination of the Euphrates river should the site go “hot”.

Olmert left the meeting and discretely sought advice from top officials all of whom signed secrecy agreements.

On Apr. 18 Israeli Defence Minister Amir Peretz met with US Secretary of Defense Robert Gates: the Americans launched their own investigation but did not really have an apatite for another pre-emptive strike on a Muslim country.

President Bush had apparently called Olmert to say that there wasn’t enough evidence for an American pre-emptive attack based on Israeli intelligence.

Makovsky said that Israel couldn’t afford for the information to be leaked so the Syrians would place SAM sites near to the building, therefore Olmert asked Bush to keep the matter quiet. Olmert didn’t ask for a green light from Bush but didn’t get a red light therefore took it as a green light to go.

Sept. 1, 2007 saw the preparations complete. The White House was informed as well as British MI6 (whom it’s thought Mossad works very closely with) although timings were with held. Then, on Sept. 5, the Israeli cabinet voted on whether they should take action on the reactor: all voted yes other than one who abstained and it was then decided the attack would take place that night.

They flew along the Mediterranean coast before heading in land near to the Syrian Turkish border and at sometime between 12.40 and 12.53 the codeword ‘Arizona’ came across the secure channels indicating that the reactor had been destroyed.

Markovsky’s article has some convenient blanks but that can be forgiven due to the matter still being regarded as secret in Israel.

Some sources say that this attack was the first time the Suter airborne network system was used against Syrian radar systems from one of two ELINT aircraft.

A modified version would more than likely be used against Iran if an attack were to take place, along with much more advanced tech. Including malware injected by F-16s, as someone speculates.

Azerbaijan to host Israeli Air Force planes in case of attack on Iran?

Several news agencies have been running a news story, that appeared first on the Foreign Policy website, according to which Israel has secured the use of at least one of four former Soviet era airbases […]

It looks like Hezbollah is using its weaponized drones to attack Al Qaeda targets in Lebanon. Not only Hamas operates armed UAVs (Unmanned Aerial Vehicles) like the one flown over Gaza some weeks ago. Even […]