On Sunday May 6, few hours ahead of CBS 60 Minutes featuring an interview with two F-22 pilots who have asked not to fly the Raptor fighter jet because of the hypoxia symptoms experienced with the fifth generation stealth fighter, Lockheed Martin launched a campaign to promote the Raptor on Twitter and Flickr.

@LockheedMartin: On May 2, we delivered the last F-22 to @usairforce completing the only 5th gen stealth fighter fleet in the world: http://ow.ly/aJwYA

@LockheedMartin: Did you know that F-22 supercruise speeds are greater than Mach 1.5 without afterburners? http://ow.ly/aJy6G

Although none mentioned the problems with the oxygen system, the timing of tweet sequence leaves no room for doubt.

At the same time the company’s Flickr photostream, usually focused on the F-35, saw the appearance of many new pictures of the last F-22 delivered to the U.S. Air Force.

As done by Northrop Grumman, that tried to reverse Pentagon’s decision to cancel the Global Hawk Block 30 program with the help of Twitter, Lockheed Martin has entrusted tweets (along with images on Flickr) to claim some of the Raptor’s unmatched capabilities and performance. 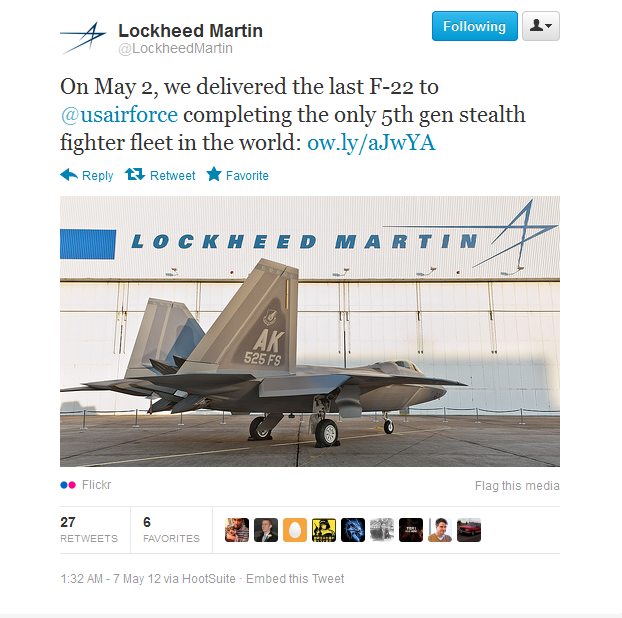 The U.S. Air Force’s 3rd Wing at Joint Base Elmendorf-Richardson, Alaska, has conceived a new rapid deployment concept that allows to deploy a package of F-22s and supporting logistics to any forward operating base and […]