The news of Day 5 is that the Libyan Arab Republic Air Force “no longer exists as a fighting force”, a statement that impressed both media and public opinion and that was frantically retweeted on Twitter from around 16.00GMT (I’m still getting the “breaking news” around 23.50GMT).

Actually, we already knew that Libyans had a largely obsolete fleet flown by scarcely trained crews and that they were equipped with a variety of old Soviet surface-to-air weaponry meaning that I didn’t expect LARAF to be as effective as it could be in the ’70s or ’80s to pose a real threat to the coalition planes. So, when I read the words the commander of Royal Air Force Operation Bellamy had said in Gioia del Colle during a visit to the RAF detachment, I didn’t find them particularly interesting. What I really found noteworthy were his next words (widely underrated and omitted): “….his integrated air defense system and command and control networks are severely degraded to the point that we can operate with near impunity across Libya”. When thinking to the way the air campaign had developed until Day 4, I couldn’t explain why coalition planes weren’t operating in the eastern part of the country and thought it was because SAM risk around Tripoli was high. Obviously, basing on the the words by Air Vice Marshal Greg Bagwell, backed by BBC News reports mentioning that no aircraft was ever launched and no Air Defence radar has ever been “switched on”, that wasn’t the reason.
According to the Pentagon, 336 sorties and 108 raids were flown since the beginning of Odyssey Dawn. 21

2 sorties were flown by US planes; the remaining ones (124) were flown in decreasing shares by France, UK, Italy, Canada, Spain, Belgium and Denmark. Interestingly, total for the past 24 hrs (at 16.00 GMT) were 175 sorties, of those, 113 were US ones and 62 from non-US members of the coalition, figures that would indicate an escalation of the air campaign in the last day (most probably to cancel once and forever what remained of the known air defence installation rendering LARAF almost completely harmless), during which one third of the total sorties were flown.
As the battlespace was shaped to enable a safe usage by the coalition aircraft, the type of missions that will be flown in the next days will not change that much. There will be strikes, reconnaissance missions, combat air patrols (fewer, given the absence of significant aerial threats) and, needless to say, SEAD. In fact, even if the Libyan IADS (Integrated Air Defence System) should be almost unserviceable, this doesn’t implies that the overflown areas are clear of mobile SAM (Surface to Air Missile) stations. For this reason, while flying almost undisturbed within the No-Fly Zone allied aircraft will still have to rely on precious SEAD assets, whose threatening presence should persuade loyalists to keep their radars off unless they want to get a direct hit by an AGM-88 HARM (High-speed Anti-Radiation Missile). More or less in the same way since Vietnam war, these planes (EA-18G Growler, F-16CJ and Tornado ECR in this theatre of operation, plus some other types that can carry the AGM-88 but can’t be considered specialized SEAD p 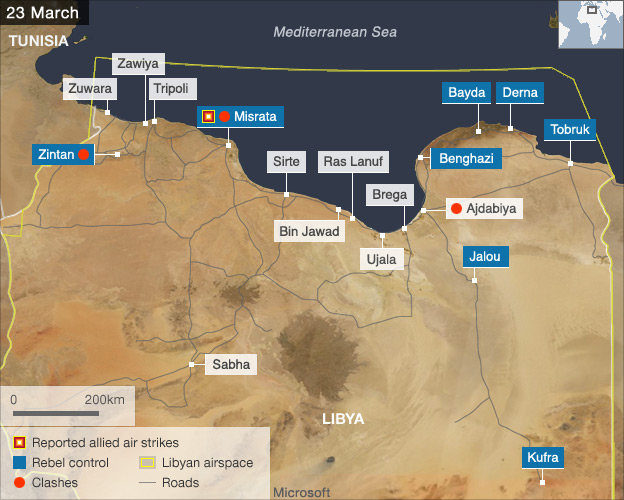 latforms), are the first to enter the enemy airspace and the last to get out of it (hence, their motto “First In, Last Out”): their duty is in fact to support bombers, transport aircraft, rescue choppers and any other aircraft entering the area of operation suppressing any enemy air defence that could be able to attack allied aircraft. Unlike other types of missions Wild Weasels (as SEAD one are known) can be considered successful even if no missile was fired, meaning that the deterrence power of the assets ensured a safe transit of the other flights across the area. This is what the Italian Air Force was compelled to explain to some journalists that could not understand why the first missions of the Tornado ECRs were considered “successful” even if no missile had been fired…..

1) USMC unveiled some interesting details about the rescue mission of one of the crew members of the USAFE F-15E crashed 40 km east of Benghazi. The mission flown by the USMC was a TRAP (Tactical Recovery of Aircraft and Personnel) and not a CSAR: the first is “a planned recovery of personnel or equipment of your own operations located in your own area of responsibility”, the latter is “a planned rescue mission of distressed personnel anywhere in a joint theater”. What makes the difference is the lethality of the scenario: CSAR missions are flown in high-lethality ones, TRAP are those flown in medium to low-lethality ones, as the Libyan one. That said, the rescue mission involved 6 aircraft: 2 MV-22s, 2 CH-53E carryng quick reaction force personnel, and 2 AV-8B Harrier II. The rescue package was launched within 30min of the crash, when the ship was 130 NM from the crash site. On arrival, the AV-8Bs dropped two LGBs before one of the Osprey tilt-rotors landed to recover the pilot. 90 minutes of the mishap, the Osprey landed aboard the USS Kearsarge. The wreckage of the F-15E was later bombed to prevent some pieces of it from going in the wrong hands.

2) There are not many significant changes in the Odyssey Dawn order of battle. A Spanish CN-235 maritime surveillance aircraft departed Getafe for Decimomannu where it will contribute to enforce U.N. arms embargo on Libya. The Norwegian F-16 were finally cleared to join the coalition and should start operating from Day 6 while, not supporting the war in Libya, Germany pulled out its crew members from NATO E-3 AWACS. The Italian Air Force, that is officially contributing to the coalition with 8 aircraft is actually flying some more sorties under its own control and coordination: along with the SEAD made of small packages comprising Tornado ECRs, Tornado IDS (for AAR) an

d F-16s for escort, Typhoons operating from Trapani were reported by the news agencies to be involved in air defence sorties (Combat Air Patrols) to the south of Sicily. Noteworthy, for the first time since the beginning of the operations, one of the Italian KC-130Js flew a combat sortie refueling the Italian SEAD package in place of the Tornado IDS. Remaining on the tanker topic, I’ve never explained that the US KC-135s operate from bases located in the UK (RAF Mildenhall) and Spain (Moron), while the French C-135s depart from Istres (France). The Canadian and Spanish tankers are respectively flying from Trapani and Decimomannu where they are deployed together with CF-18s and EF-18s. Some 20 – 25 tankers are required each day to refuel all the aircraft involved.
There were confirmed news of a strike performed by the Canadians using Laser Guided Bombs (LGBs) and PGMs (either JDAM or LGBs) dropped for the first time by Danish F-16s deployed to Sigonella. 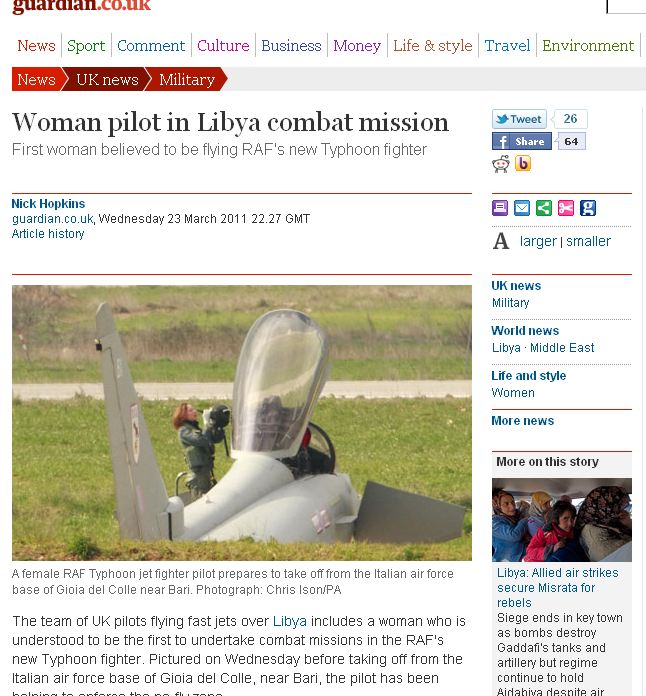 3) Many female pilots are involved in the operation flying tactical planes. During the last two days a RAF one flying Typhoon from Gioia del Colle as well as an Italian one flying the Typhoon from Trapani were interviewed/photographed and somehow made the news.

4) After explaining in my previous debrief that there was the possibility to track the Canadian CC-150 (A310) tanker because it broadcasted full ADS-B information, I was informed by many readers that “Petrol” was no longer visible on Flightradar24. 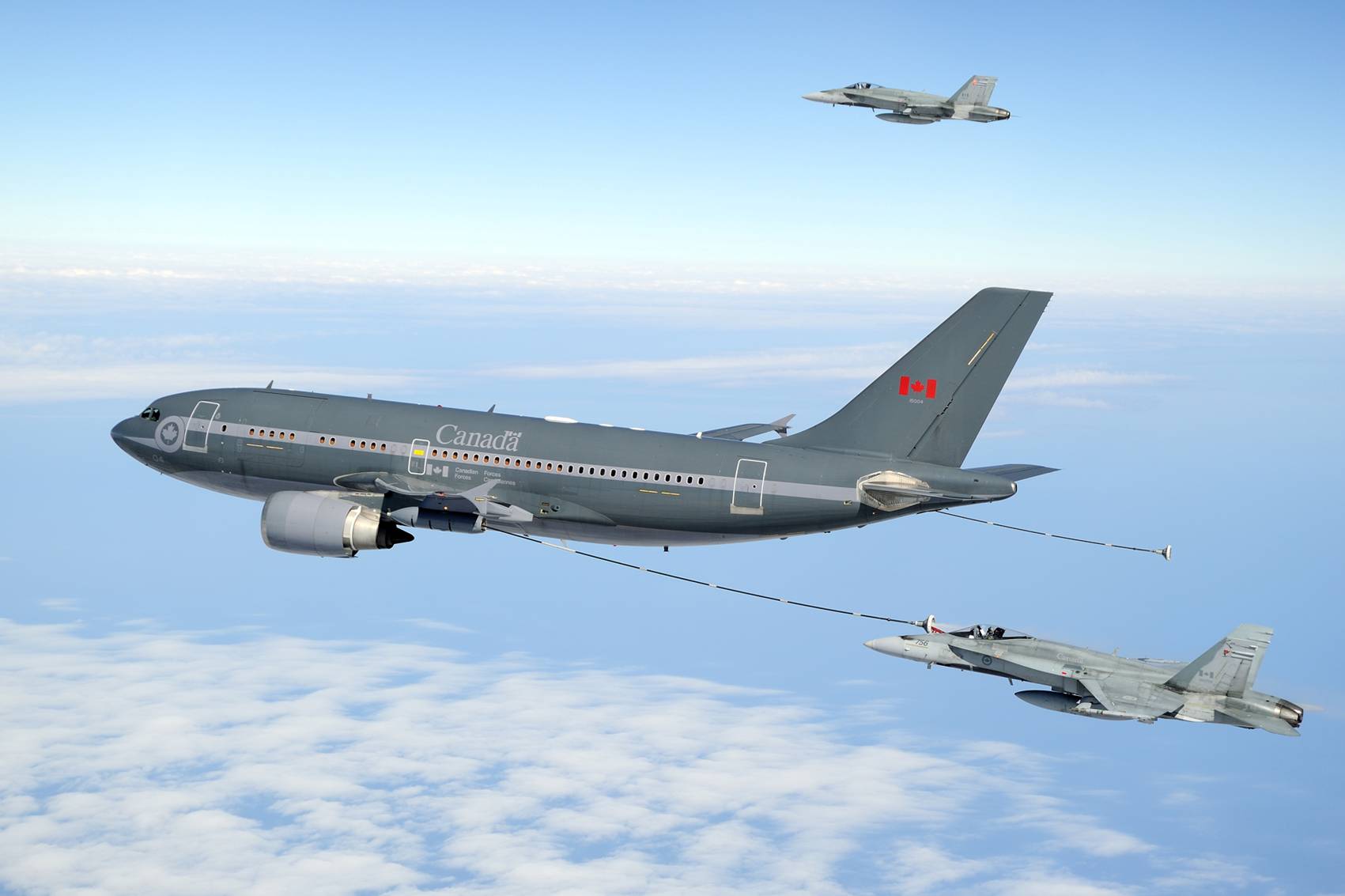 Even if I’m sorry for all the aviation geeks that will not be able to watch the tanker at work I’m proud because someone in Canada has read my remarks and has modified the transponder configuration to prevent some information to be broadcast (read Day 3 report for some thoughts about the help that can be provided by spotters and enthusiasts to improve self-protection and safety of some High Value assets). However, another visitor sent me the following screenshot, to inform me that although not showing its position on the virtual radar, the CC-150 Polaris (the same?), that changed its Hex code, still advertise itself with the actual callsign. Some more tuning required.

5) Dealing with tankers and ADS-B many visitors sent me the screenshot taken from flightradar24 showing what they thought were some suspicious orbits flown by the A330MRTT tanker using callsign “Casa 335”. Someone guessed the EADS tanker flying orbits in that position was refueling some bomber coming from the US in a Global Power mission for Odyssey Dawn. However, the one tracked via ADS-B was the RAF example; as far as I known, none of the RAF tankers will be fitted with the Aerial Refueling Boom System (ARBS) as all the British tankers will be fitted with 2 Cobham 905E underwing pods and 7 will be fitted with a Cobham 805E Fuselage Refuelling Unit, so I’m pretty sure the aircraft was simply involved in a test flight of air-to-air refueling with the probe and drogue system (maybe with some SpAF plane, given the position of the orbit).

Diyarbakir airbase, one of the most important airbases in Turkey, located in the southeastern part of the country, is on alert status today for a possible Syrian attack. Tolga Ozbek, aviation editor of Hurriyet Newspaper, […]

If you thought Buk (SA-11) SAM operators had a clear view of the airspace around their vehicle you were wrong. The images and video in this post show the inside of a Buk (SA-11) SAM […]