A civilian-owned CF-104D Starfighter flew for its first time in 33 years in Norway. And here are some of the coolest clips filmed during the historical “first flight.”

Chased by a dual seater F-16B of the RNoAF, the aircraft, brought back to airworthy conditions in 13 years by the Norwegian Foreningen Starfighterens Venner (Friends of the Starfighter Association) flew for about 50 minutes becoming the first “Zipper” (or “Missile with a man in it” in accordance to one of the several nicknames the legendary plane has had during its long career) to fly in Europe in more than 11 years: the last flight of an F-104 in the Old Continent took place in Italy, on Jul. 27, 2005, when the Italian Air Force retired its last aircraft (a two-seater TF-104, the same type of aircraft this Author had the opportunity to fly in November 2000) after more than 40 years of service.

Eskil Amdal, a Norwegian test pilot, flew the Starfighter “637” during its newest “first flight” that was broadcast live on Facebook.

The following video shows the takeoff of the chase F-16B that performed an airborne pickup of the F-104 and the later approach and landing:

Here’s an interesting clip with footage from inside the cockpit:

The following footage shows the CF-104D from the backseat of the F-16B (taken by Helge Andreassen):

There are rumors that the Norwegian association will some day bring the F-104 back to airshows around Europe. However it looks like there are no plans (and possibly clearances) at the moment to fly this magnificient aircraft outside of Norway. 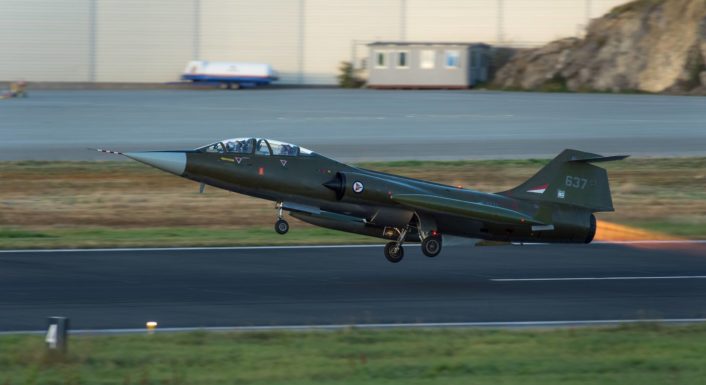 H/T to Giulio Cristante, Bjørnar Bolsøy and all the readers who sent us links and comments!

Watch this: F-104 Starfighter “missile with a man in it” buzzes people on landing

2,580 F-104 were employed by the air forces of 15 countries in about 50 years. The F-104 represented a huge leap forward for all those countries that passed from old subsonic and “forgiving” jets to […]