Subs increasingly operating in the Arctic.

Few days ago we have published a stunning video showing a U.S. submarine breaking the ice to surface in the Arctic Circle during an exercise.

The images in this article were posted by the Royal Navy and show USS Hampton (SSN 767) from San Diego, emerging through thick ice to report its safe transit through the Bering Strait and to re-fix the boat’s position by GPS before continuing to U.S. Navy Ice Camp Sargo, around 170 miles north of Alaska’s Prudhoe Bay.

USS Hampton is one of the subs taking part in Ice Exercise (ICEX) 2016, a five-week exercise that include multiple arctic transits, a North Pole surfacing, scientific data collection and other training evolutions during their time in the region.

As mentioned above, the photos were released by the Royal Navy: two officers, Lt Cdr Moreland (HMS Astute) and Lt Harris (HMS Trenchant), are operating aboard USS Hampton, looking into the equipment, training and procedures needed to allow the Royal Navy’s hunter-killer boats – Trafalgar and Astute-class boats to safely return under the ice after more than a decade. 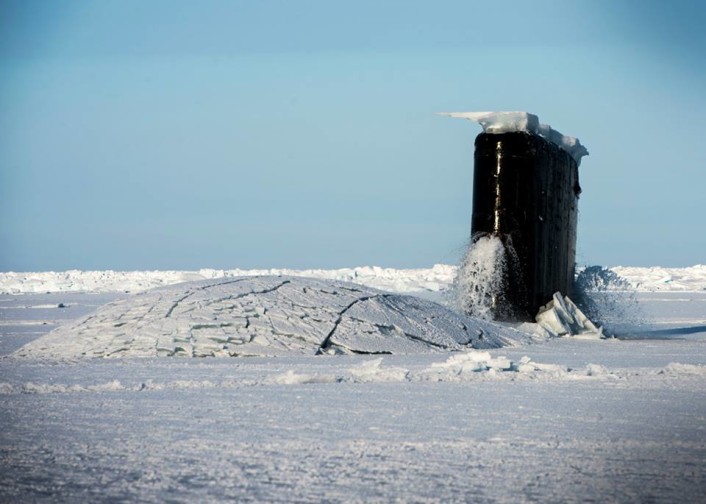 USMC Harriers aboard USS Wasp launch “frequent” airstrikes against ISIS in Libya. Operation Odyssey Lightning kicked off on Aug. 1, when the U.S. launched a new round of air strikes against Islamic State positions in […]

“The Dambusters” are on the move with their F-35B stealth aircraft. Earlier today, British F-35B aircraft took off from their homebase at RAF Marham, UK, for their first overseas deployment. The aircraft will spend six […]