Russia’s only aircraft carrier Admiral Kuznetsov passed through the English Channel recently. But the Dutch Navy had no ships available for escort duties.

In spite of a commitment to the NATO alliance, several years of budget cuts undermined the ability of European countries to perform routine duties, as providing escort to Russian vessels as they sail close to the territorial waters.

Among the arms undermined by shrinking defense budgets, there is also the Royal Netherlands Navy.

When on May 8 the Russian aircraft carrier Admiral Kuznetsov, sailed through the Channel on international waters, the Royal Netherlands Navy was unable to respond because it lacked warships for the task.

As Lieuwe de Vries and Ruben Veenstra reported, Russia’s only aircraft carrier, with a task force of three tankers, an ocean-going tug and the Landing Support Ship Minsk, took an unusual route to return to its homebase.

According to the Dutch reporters and other local media, “the Russians usually prefer to go around Ireland on the North Atlantic Ocean to avoid other maritime traffic. The journey plotted through the narrow waters can be seen as a typical show of force on behalf of the Russians.”

The Royal Navy dispatched a modern air-defense destroyer, the HMS Dragon, to shadow the Kuznetsov but, as the task force moved up towards the North Sea, it would be a task of the Royal Netherlands Navy to escort the Russians.

“The Royal Netherlands Navy already had made public its spotting of the Russians a few days earlier, when the HNLMS De Zeven Provinciën (English: The Seven Provinces) had picked it up on radar. But by the time the Kuznetsov arrived in the Dutch Exclusive Economic Zone the Seven Provinces had gone on its way for duties in Somali waters and no other ships were at hand for escort duties” de Vries and Veenstra explain.

Unfortunately, the Dutch have retired their fleet of P-3C Orion aircraft in 2002. In the following years, the Dutch Navy Air Arm, that once operated both Maritime Patrol Aircraft and Lynx helicopter, was disbanded.

Ten NH-90 helicopters, operated by the Defense Helicopter Command (DHC), have replaced 24 Lynx choppers. But helicopters are not the best assets for long range shadowing of enemy vessels. 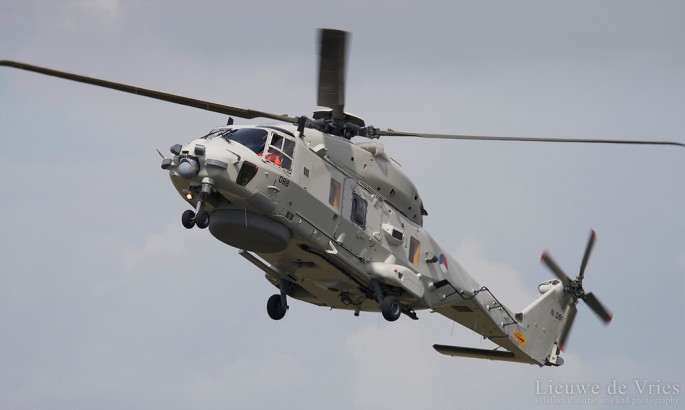 “Instead of deploying a suitable response the Netherlands Coastguard was asked to deploy one of its Dornier 228 aircraft. Though capable in its intended role the aircraft lacks any equipment to gather worthwhile electronic or photographic intelligence.”

Obviously, the inability to provide a proper escort to the Russian Navy is far from being a surprise. Since the 1980s, the Dutch Navy has drastically reduced its force: from 56, to 23 ships; from 43 aircraft, to none.

The incident, more embarrassing than other, has only highlighted a widespread situation among NATO partners, most of which are quite far from the Treaty’s target 2 percent of the GDP on defense spending (with the Netherlands around 1.3 percent). In the same days Russia has become more aggressive in East Europe.

Boeing 747-400 on a DoD mission lands at Poznan airport for the first time in history, bringing 300 US troops to Poland.

An Atlas Air Boeing 747-400 on “a military passenger charter flight” for the U.S. Defense Department’s (DoD) landed for the first time at the Polish airport of Poznan. An Atlas Air B747, operating for the […]