Although it may seem just another B-1 refueling video, this footage shows something different.

The following footage was shot on Feb. 12, over Iraq.

It shows a B-1B “Lancer” (or “Bone”) taking fuel from a U.S. Air Force KC-135 Stratotanker during a mission in support of Operation Inherent Resolve.

There are several such videos available online but this one caught our attention as it seems to show something different: the B-1, operating from Al Udeid airbase, in Qatar, has at least one new circle-shaped dorsal sensor (most probably an antenna) on the upper fuselage past of the cockpit area.

The same sensor doesn’t seem to be present on B-1s featured by similar footage, perhaps a sign that 34th Expeditionary Bomb Squadron Bones currently deployed in theater have received some kind of upgrade including the new antenna.

Does anyone have a clue when was the new sensor was installed and, above all, what it is? 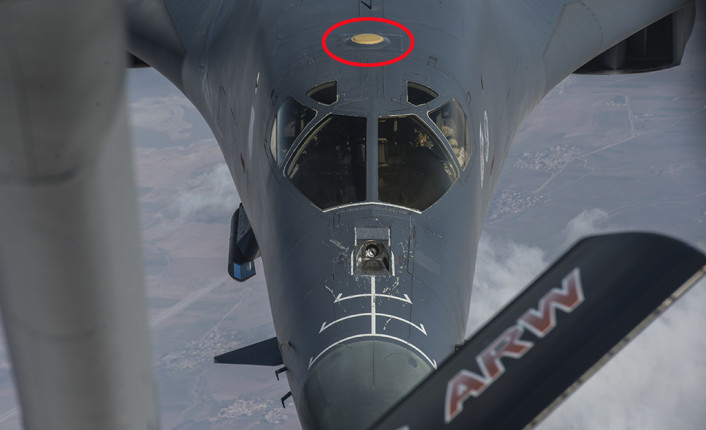 As explained on a previous post, on Jan. 10, 1964, a B-52H lost its vertical tail during a test mission over North Mexico. The aircraft was able to land six hours later and here’s a […]

A quite unusual photo caught a U.S. Air Force Special Operations Command’s CV-22 Osprey with the full moon in the background. Taken close to RAF Mildenhall, UK, on Oct. 7, 2014, by Gary Chadwick, the […]