Built as a strategic reconnaissance aircraft able to fly at 88,000 feet and Mach 3, the iconic Lockheed SR-71 required aircrews to wear a special silver pressure suit to ensure their safety. This proved to be much useful during the time, as the aircraft experienced several accidents at very high speeds and altitudes during its test flights.

The protection provided by these suits was put to test on Jan. 25, 1966 when Blackbird tail number 952 disintegrated mid-air during a systems evaluation flight. The mission was intended to investigate procedures designed to reduce trim drag and improve high Mach cruise performance while the center of gravity (CG) was located further aft than normal, reducing the Blackbird’s longitudinal stability.

The SR-71 was driven by Bill Weaver with a Lockheed flight test specialist, Jim Zwayer in the back seat and it took off from Edwards AFB at 11:20 am . They refueled from a KC-135, accelerated to Mach 3.2 and climbed to 78,000 feet, which was their initial cruise altitude.

During a programmed thirty-five-degree bank right turn they experienced an “inlet unstart” that caused the immediate unstart on the right J-58 engine, forcing the aircraft to roll further right and start to pitch up. An inlet unstart happened when a shock wave was rapidly ejected back outside the inlet. When an inlet unstart occurred a device called the cross-tie system was enabled to minimize the extreme rolling and yaw of the aircraft and to prevent the good inlet from unstarting. At the same time the cross-tie system also restarted the good engine. As Weaver himself told to former Blackbird pilot Col. Richard H. Graham in his book, “SR-71 The Complete Illustrated History of THE BLACKBIRD The World’s Highest, Fastest Plane”: “I jammed the control stick as far left and forward as it would go. No response. I instantly knew we were in for a wild ride.”

Since the chances to survive an ejection at Mach 3.18 and 78,000 feet weren’t very good, Weaver and Zwayer decided to stay with the aircraft to restore control until they reached a lower speed and altitude, but the cumulative effects of system malfunctions exceeded flight control authority. Everything seemed to unfold in slow motion, even if the time from event onset to catastrophic departure from controlled flight was only two to three seconds.

Weaver recalls that he was “still trying to communicate with Jim, I blacked out, succumbing to extremely high g-forces. Then the SR-71 literally disintegrated around us.”

Weaver struggled to realize what was really happening. “I could not have survived what had just happened. I must be dead. As full awareness took hold, I realized I was not dead. But somehow I had separated from the airplane. I had no idea how this could have happened; I hadn’t initiated an ejection. The sound of rushing air and what sounded like straps flapping in the wind confirmed I was falling, but I couldn’t see anything. My pressure suit’s face plate had frozen over and I was staring at a layer of ice.”

It was at that point that the pressure suit proved to be very effective protection for Weaver. In fact, once it was inflated, an emergency oxygen cylinder in the seat kit attached to the parachute harness was functioning. It not only supplied breathing oxygen, but also pressurized the suit, preventing Weaver’s blood from boiling at the extremely high altitude. In this way the suit’s pressurization had also provided physical protection from intense buffeting and g-forces. That inflated suit had become like a tiny escape capsule.

Another system conceived to safeguard the Blackbird aircrew during the bailout procedure was the SR-71’s parachute system. To prevent body tumbling motions and physical injury due to the centrifugal forces it was designed to automatically deploy a small-diameter stabilizing parachute shortly after ejection and seat separation.

Since Weaver had not intentionally activated the ejection sequence, he thought that stabilizing chute might not have deployed. But he quickly determined he was falling vertically and not tumbling, meaning that the little parachute had deployed and was doing its job. The next concern was for the main parachute, which was designed to open automatically at 15,000 feet, but again he had no assurance the automatic-opening function would work. So Weaver decided to open the faceplate, to estimate his height above the ground but as he reached for the faceplate, he felt the reassuring sudden deceleration of main parachute deployment.

After landing, Weaver was rescued by Albert Mitchell Sr., owner of a ranch in northeastern New Mexico, who helped him with the chute, then reached Zwayer who had landed not far away, with his own Hughes helicopter. Mitchell returned few minutes later reporting that Zwayer was dead: in fact he had suffered a broken neck during the aircraft’s disintegration and was killed almost instantly. Moreover Mitchell said that his ranch foreman would watch over Zwayer’s body until the arrival of the authorities and he flew Weaver to the Tucumcari hospital.

Investigation of the incident determined that the nose section of the Blackbird had broken off aft of the rear cockpit and crashed ten miles from the main wreckage. The resultant very high g-forces had literally ripped Weaver and Zwayer from the airplane. After this crash, testing with the CG aft of normal limits was discontinued, and trim-drag issues were resolved via aerodynamic means. Moreover the inlet control system was improved and the inlet unstarts almost stopped with the development of the Digital Automatic Flight and Inlet Control System.

Two weeks after the accident Weaver was back in a Blackbird. As he recalls: “It was my first flight since the accident, so a flight test engineer in the back seat was probably a little apprehensive about my state of mind and confidence. As we roared down the runway and lifted off, I heard an anxious voice over the intercom. “Bill! Bill! Are you there?” “Yeah George. What’s the matter?” “Thank God! I thought you might have left.” The rear cockpit of the SR-71 has no forward visibility – only a small window on each side – and George couldn’t see me. A big red light on the master-warning panel in the rear seat had illuminated just as we rotated, stating: “Pilot Ejected”. Fortunately, the cause was a misadjusted micro switch, not my departure.” 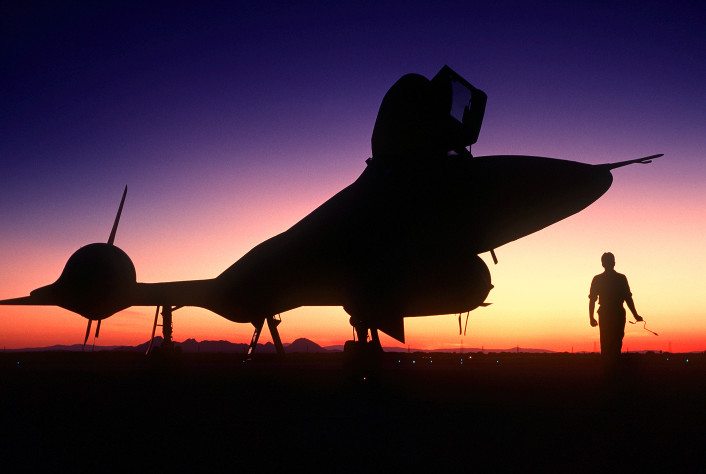 “Tabor 11” taking off at night for the F-22A inaugural deployment to Europe. We have already posted some cool pictures of the F-22s arriving in Germany on Aug. 28. Here are some stunning photographs of […]

This is how you depart the tanker like a boss! Taken on Jul. 23, during a mission in support of Operation Inherent Resolve, this cool shot shows a U.S. Air Force B-1B Lancer (“Bone” for […]