Even if no SR-71 was lost due to hostile actions during the entire Blackbird career, the Mach 3+ capable spyplane faced an adversary that could effectively intercept it: the MiG-31 Foxhound.

The SR-71 impressive mission record was reached thanks to some unique features of its airframe, such as its ability to fly at more than three and a half times the speed of sound at 88,000 feet, its small (for the time) Radar Cross Section (RCS) and its sophisticated electronic countermeasures (ECM).

These flight characteristics made the Blackbird safe against any attempt of interception conducted by enemy fighters or surface-to-air missiles (SAM), during its reconnaissance missions in the Russian skies during the Cold War years.

The only aircraft which possessed the capabilities to shoot down an SR-71 was the F-14 Tomcat, that could use its AIM-54 Phoenix long range missile against the fast black plane.

In fact the Phoenix was developed to shoot down Soviet cruise missiles which flew at an altitude similar to the one reached by the Blackbird. Moreover with a speed between Mach 4 and Mach 5, the AIM-54 was fast enough to cause serious problems to the SR-71.

But, the capabilities featured by the Tomcat and its long range missiles, weren’t matched by any Russian interceptor, and to stop SR-71s’ overflights, the Soviets developed an aircraft which had similar characteristics to those owned by the F-14.

As we have recently explained, the only aircraft that had a speed close to the one of the SR-71 was the MiG-25. But even if it could fly at Mach 3.2, the Foxbat wasn’t able to sustain such speeds long enough to reach the Blackbird.

Another serious problem which affected the Foxbat was the lack of effectiveness of its R-40 missiles (AA-6 Acrid based on NATO designation) against an air-to-air target smaller than a large strategic bomber.

These deficiencies were settled when a more advanced MiG-25 development, the MiG-31, entered in service in the 1980s: the Foxhound was armed with a missile very similar to the US AIM-54 Phoenix, the R-33 (AA-9 Amos as reported by NATO designation).

This weapon was ideal not only for shooting down the American bombers, but also to intercept and destroy fast reconnaissance aircraft, such as the SR-71.

This statement was dramatically confirmed in Paul Crickmore’s book Lockheed Blackbird: Beyond The Secret Missions.

In this book one of the first Foxhound pilots, Captain Mikhail Myagkiy, who had been scrambled with its MiG-31 several times to intercept the US super-fast spy plane, explains how he was able to lock on a Blackbird on Jan. 31, 1986:

“The scheme for intercepting the SR-71 was computed down to the last second, and the MiGs had to launch exactly 16 minutes after the initial alert. (…) They alerted us for an intercept at 11.00. They sounded the alarm with a shrill bell and then confirmed it with a loudspeaker. The appearance of an SR-71 was always accompanied by nervousness. Everyone began to talk in frenzied voices, to scurry about, and react to the situation with excessive emotion.”

The Foxhound climbed at 65,676 feet where the crew had the Blackbird in sight and according to Myagkiy:

“Had the spy plane violated Soviet airspace, a live missile launch would have been carried out. There was no practically chance the aircraft could avoid an R-33 missile.”

After this interception Blackbirds reportedly began to fly their reconnaissance missions from outside the borders of the Soviet Union. 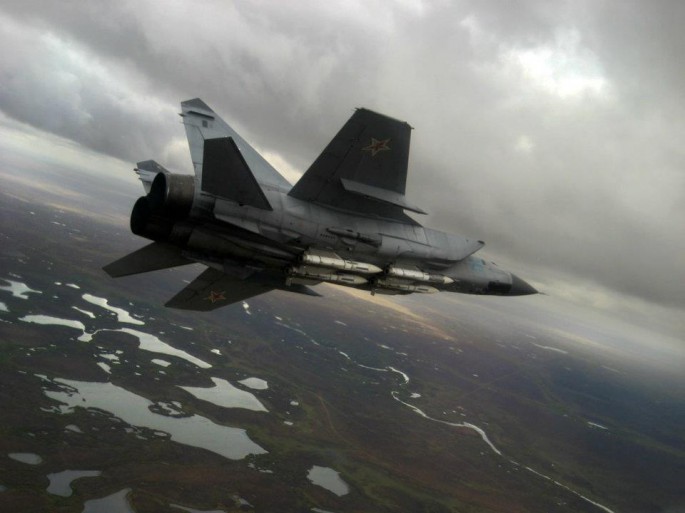 But the MiG-31s intercepted the SR-71 at least another time.

On Sept. 3, 2012 an article written by Rakesh Krishman Simha for Indrus.in explains how the Foxhound was able to stop Blackbirds spy missions over Soviet Union on Jun. 3, 1986.

That day, no less than six MiG-31s “intercepted” an SR-71 over the Barents Sea by performing a coordinated interception that subjected the Blackbird to a possible all angle air-to-air missiles attack.

Apparently, after this interception, no SR-71 flew a reconnaissance missions over the Soviet Union and few years later the Blackbird was retired to be replaced with the satellites.

Even if claiming that the MiG-31 was one of the causes of the SR-71 retirement is a bit far fetched, it is safe to say that towards the end of the career of the legendary spyplane, Russians proved to have developed tactics that could put the Blackbird at risk.

The Mig-31 is still in service, but the SR-71 successor, dubbed SR-72 and capable to reach Mach 6, should be quite safe at hypersonic speed.

First “Kinzhal” Fired from MiG-31 in Southwest Russia Hits Target According to Russians. But it’s a modified Iskander SRBM. The Russian Aerospace Forces have conducted the first successful test firing of the air-launched Kinzhal (Dagger) […]

MiG working on a new interceptor, capable of Mach 4

The Russian Armed Forces are working on the Mig-41, a new supersonic  fighter based on the Mig-31 Foxhound. According to the famous experimental pilot Anatoliy Kvochur, the MiG-41 is to be capable of reaching speeds above […]