According to the Italian Air Force, the aircraft, registration VT-ANQ, lost radio contact with the Air Traffic Control agencies and entered the Italian airspace unauthorized. For this reason the QRA (Quick Reaction Alert) cell at Grosseto airbase was scrambled to intercept, identify and escort the liner, as done last month with a Lebanese A320 following a bomb threat.

The two F-2000A jets of the 4° Stormo (Wing) reached the B787 at 24,000 feet to the southeast of Rome. The Typhoons identified the civil plane and shadowed it from distance, not to be seen by passengers and once at 30 kilometers from destination, they were cleared to return to their base. 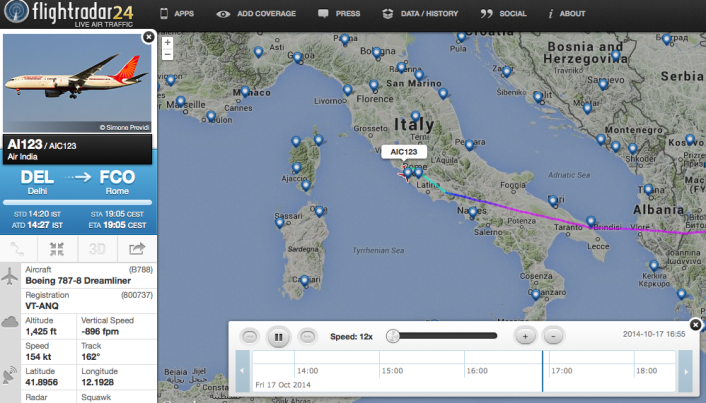 Above, a screenshot from Flightradar24.com showing the route followed by the AIC123 flight.

The video gives some insights about the systems aboard the M-345 trainer aircraft and also the first glimpse of the advanced cockpit. As you may already know, just before Christmas, the Italian Air Force received […]

On Aug. 27, Giovanni Maduli, witnessed, from the beach of Torvaianica, next to Pratica di Mare airbase, to an interesting Maritime SAR (Search And Rescue) exercise involving an AB212 of the 15° Stormo of the […]