Developed as interceptor to protect U.S. Navy’s Carrier Battle Groups (CVBG), the F-4 had frequent close encounters with Soviet Tu-95 and Tu-16 bombers near aircraft carriers around the world

The F-4s involved in these kind of interceptions, had the main task to ensure that all airborne intruders were met within the Carrier Group’s outer air defense perimeter.

LCDR Fred Staudenmayer, who was the first RIO (Radar Intercept Officer) to command an East Coast F-4J operational USN squadron (the VF-33 Tarsiers from Jun. 21, 1973 to Jan. 19, 1974, had several chances to intercept Tu-95s and Tu-16s during his deployment in the Mediterranean sea.

“I once launched against a Soviet Tu-95 Bear that was almost upon the carrier when initially detected by our pathetic ship’s radar. […] I had the radar operating and detected a huge radar blip at about twelve miles, followed right away by a visual, and we were able to join up on his wing before he passed over the carrier at about 500 ft. This was always the goal and the politically correct thing: be on Bear or Badger’s wing, showing the world that you were escorting these uninvited visitors. […] During a cruise in the Bay of Biscay in USS Independence we had a large number of Soviet over-flights, thirty or forty as I recall, and we intercepted all of them (with assistance from sensors external to the Fleet!).”

Dealing with the attack profile followed by the F-4s during the interception: ”As a general rule, our attack profile started from a low or mid CAP (Combat Air Patrol) station (5,000 or 15,000 ft), and depending on ranges, etc. we would be in climbing attack, usually trying to attack from below. Not too much thought was given to vertical separation, sun position, hiding in the clouds, etc. These were all-weather attack profiles,” Staudenmayer recalled.

The main Bear and Badger weapons were their long range air-to-surface missiles, which caused several concerns to the Phantoms crews according to Staudenmayer:

“As the Soviet air-to-surface missiles got faster and more formidable capable our CAP stations got pushed further and further out. The goal was to be in a position to destroy the targeting or launch aircraft prior to missile release. Nevertheless, we usually trained against descending supersonic missile simulation […] We always thought we had a pretty good capability against such missiles, and an outstanding capability against Bears and Badgers.”

The F-4s belonging to the VF-11 Red Rippers were also involved in many Tu-16 interceptions, and William Greer told to Davies how several of them took place at night:

“Many intercepts were run at night, and the Badger would frequently shine a rather bright and distracting light at the escorting Phantom pilot. VF-11 rigged up a very strong spotlight, powered from the Phantom’s electrical system, and the first time we hit the Badger with that their performance became somewhat more restrained. I once intercepted a Bear while returning from my cruise in USS Enterprise, and with the aid of my two years of Russian at the Naval Academy, some white cards and a grease pencil, exchanged brief notes with the crewman occupying the rear gun sighting position.”

Another U.S. Navy Spook (as the legendary Phantom was dubbed by its personnel) pilot, Steve Rudloff, who experienced several Bear encounters, revealed that despite the tense moments, funny  events took place during these interceptions, as happened when one Tu-95 rear gunner offered a bottle of vodka to him: “ On Alert 5 (the high alert condition for crew members on the deck) aircraft for a brief time the back seat was equipped with a copy of Playboy magazine. I took off and intercepted a Bear, and in retaliation for the vodka I flashed the magazine centerfold, getting a hearty smile and a thumbs-up in response. We were always taking pictures of them, and vice versa. We were more than willing to take our oxygen masks off and let them get pictures.”

Moreover as explained by Rudloff, Phantom pilots experienced also chatty times with Soviet aircrews: “There was a point on one of my cruises where we actually spoke to some of Bears crew members. We indicated which frequency we were on and talked to a crew member who spoke English. He told us he lived in Moscow. Suddenly there was some talk in the background in Russian, and the conversation ceased, even though we tried to raise him again.” 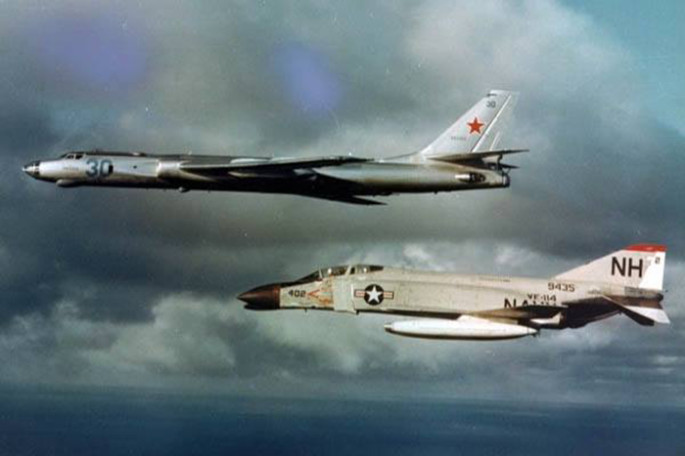 [Video] Ten of the most dangerous carrier deck mishaps