One of the busiest commercial routes went over Iraq. Until it was closed because of the U.S. air strikes against ISIS positions.

Even if the situation in Iraq was already quite difficult, with Iraqi gunships and attack planes striking ISIS terrorists around Mosul, it was not until Aug. 8 that the airspace over Iraq was banned to civil aircraft as a consequence of the first U.S. airstrikes in the country.

Until the Federal Aviation Administration (FAA) banned all U.S. airlines (followed by British Airways and all the other major ones) from flying over Iraq because of the “hazardous situation” created by the armed conflict in the region, hundred commercial flights crossed each day the Iraqi airspace on their way between Europe and Asia and (vice versa), at high altitude, well above the reach of MANPADS (Man Portable Air Defense Systems) and the weapons known to be in the hands of the militants.

The following image, from Flightradar24.com, shows aircraft (those equipped with ADS-B transponder) crossing the airspace over Iraq on Aug. 8 (top) and Jul. 8 (bottom). It looks like U.S. flights are currently routing through Iranian airspace, that is considered safer than Iraqi one. 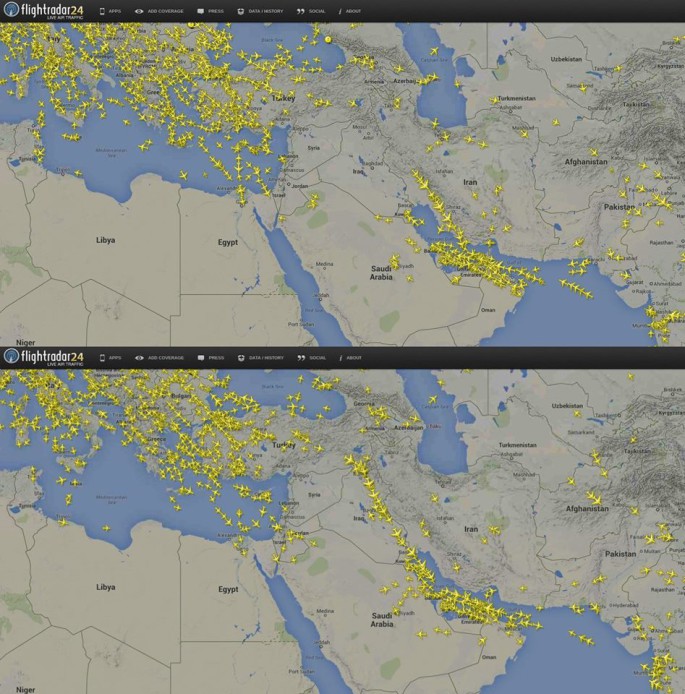 Russia has just deployed its most advanced spyplane to Syria

A Russian Air Force Tu-214R is about to land at Latakia, Syria. The Tu-214R is a Russian ISR (Intelligence Surveillance Reconnaissance) aircraft. In other words, a quite advanced spyplane. As we have already explained here […]