Russia is evacuating nationals from Syria in anticipation of a U.S. strike on Damascus’s Chemical Weapons arsenal.

An Il-62 registered RA-86570 and belonging to the Russian Ministry for Emergency Situations made a very quick visit to Syria overnight.

The aircraft, using the callsign SUM9715 was first spotted around 21.11 GMT at FL370 as it overflew Moldova heading toward the Mediterranean Sea, avoiding Turkish airspace.

The aircraft entered the Syrian airspace east of Aleppo where its ADS-B transponder and landed at Lattakia around 00.05 GMT on Aug. 28.

The aircraft made a quick stop to unload some aids and after boarding some Russian and CIS nationals “who had earlier expressed their determination to return to Moscow,” took off again at 02.00 GMT as SUM9716.

Both flights could be tracked on Flightradar24.com. 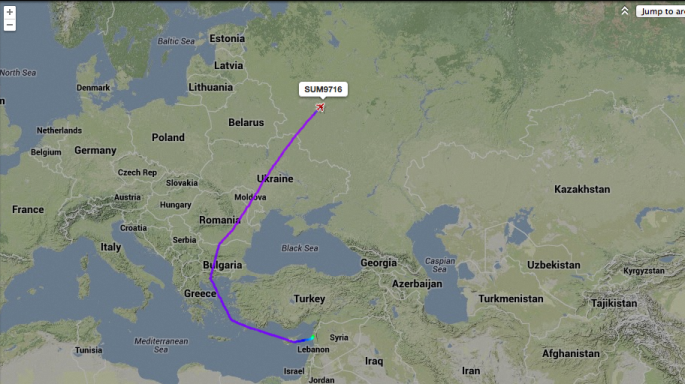 In spite of the U.S. and allied air strikes over Syria, there’s a Russian Il-76 over central Russia right now. Not only U.S. combat planes including F-22s and F-16s are currently operating inside the Syrian […]

German Weekly publication “Der Spiegel” has reported that witnesses have seen Syrian forces test firing chemical weapons systems at its research centre at Safira, east of Aleppo, in August. According to the report, a total […]