The famous Stealth Black Hawk helicopter revealed by the Osama Bin Laden raid is one of the hot topics of this blog. I still receive many comments about readers who give hints about the actual shape of the so-called MH-X.

Following the last article on the subject and the revised shape of the stealthy chopper, a reader who signs himself “John Doe”, has sent me some emails to show me some interesting past designs that could have been used to design the current secret shape of the Stealth Black Hawk.

The last version of the Stealth Black Hawk features fixed landing gear, unlike the original rendering, that had a retractable landing gear. I “opted” for a fixed gear because a retractable one could be extremly difficult and costly to implement.

However “John Doe” pointed me to the YEH-60B SOTAS (Stand-Off Target Acquisition System) a particular version designed to detect moving targets on the battlefield and downlink the information to an Army ground station.

The only SOTAS built for the U.S. Army (flown in the early 1980s before the program was cancelled in favor of the E-8 JSTARS) had a retractable main gear whose shape could have been used on the MH-X as well.

“The gear can always retract up into a fairing with doors.  As long as the fairing is properly shaped, it will have a much lower signature,” he wrote me.

“The tail wheel is probably retractable, as it is otherwise a great reflector.”

Then, he suggests few more upgrades based on past prototypes, as the ACAP, the Army’s Advanced Composite Airframe Programme (ACAP), whose goal was the development of an all-composite helicopter fuselage lighter and less costly to build than the predominantly metal airframes in general use.

“I would bet it has a flat windshield with a gold layer, for electrical continuity.  I would also think that it has a fairing to cover the push rods and main rotor mast, plus a fairing to cover the entire main rotor hub, like the tail rotor.  Lastly, there is probably a different IR suppressor as the hover suppressor likely has a big signature.  I’d guess ones like this.”

Anyway, as the UH-60 Black Hawk helicopter turns 40, the Israeli Air Force celebrated the anniversary with an interesting article on the official website, that provides some little known facts about the famous multi-mission combat chopper that has been in service with 21 countries.

Although it does not confirm the existence of Stealth Yanshuf (“Owl”), an Israeli top secret radar-evading chopper allegedly used to drop spies in Iran, the article discloses, among the others, some interesting details about the Black Hawk activities in Israel and the rest of the world.

For instance, the article recalls that, along with the head of the FBI and, obviously the President of the United States, the Black Hawk has carried the Head of Nuclear Energy, the UN Secretary General and the Pope.

When he visited Israel in 2000, an Israeli Yanshuf, covered in red fabrics and new linings, was used to fly Pope John Paul II. Three UH-60s were used to ferry the Pontiff during his visit: along with the one helicopter carrying the Pope, another was used to carry his medical team and a third was available on standby.

In the Second Lebanon War, in 2006, the two Israeli Black Hawk squadrons received a special citation from the IDF’s Chief of General Staff. Both “The Rolling Sword” and “The Southern Bells” performed more than 100 rescues, most in the battlefield, while under attack during the war. “As long as we have you, we are capable of confronting any operation and challenge”, said the previous IDF Chief of General Staff addressing a message to the Black Hawk personnel. 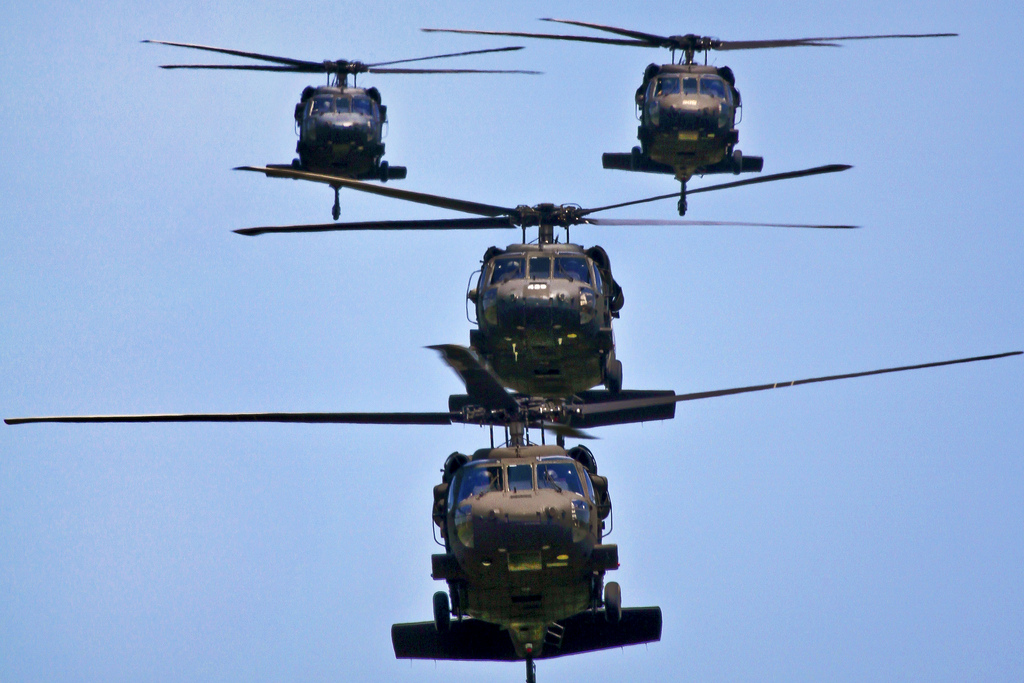 The new Flight School will be built and operated by Elbit at Kalamata Air Base, where the Hellenic Air Force currently train its pilots on the T-6A Texan II and the T-2E Buckeye. The governments […]

[Infographic] Osama Bin Laden raid (based on “No Easy Day”)

On May 6, 2011, few days after Osama Bin Laden had been killed, I published an analysis of Operation Neptune’s Spear, with the assets  involved in the raid, known and unknown facts (and some speculations). […]