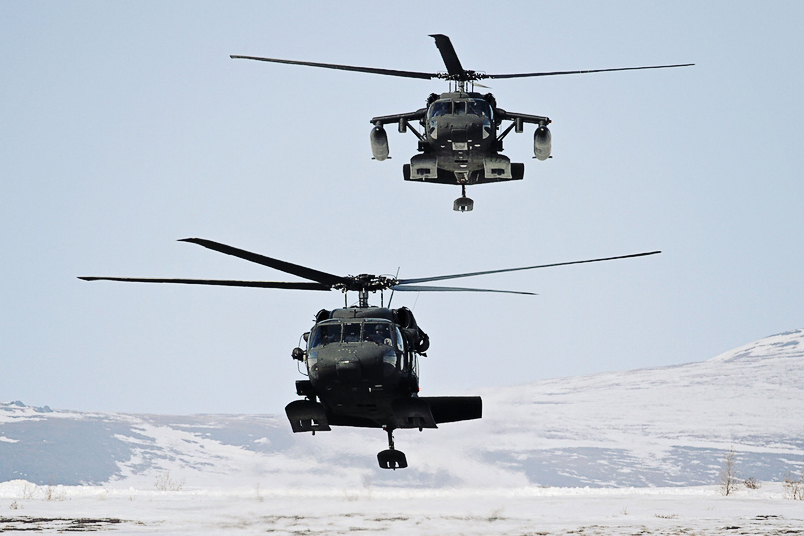 Marine One with U.S. President Barack Obama on board lands into the South Lawn of the White House on Apr. 18 at the end of a day trip to Ohio and Michigan. 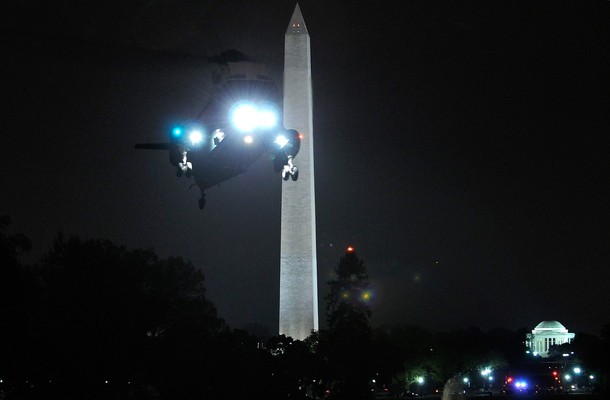 Taken in a remote jungle region in southern Peru, Cuzco, on Apr. 17, the following picture shows the helicopter wreckage of police officer Nancy Flores, killed during an armed encounter with Shining Path rebels. The group is responsible for the kidnapping of 36 gas pipeline workers who were released on April 14 and has participated in the killings of four police and military officers during the rescue missions of the hostages in the remote jungle region around the Ene and Apurimac valleys (VRAE) in southeastern Peru. 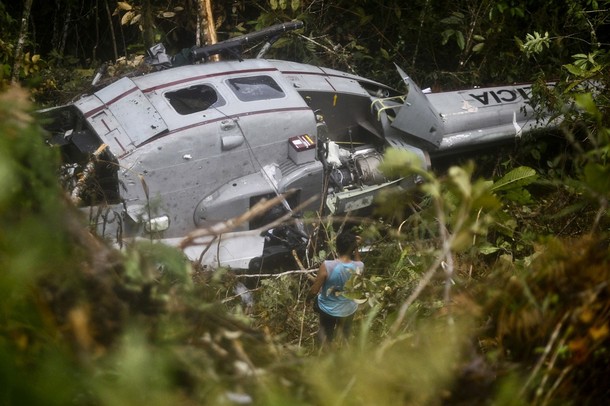 Below, Soldiers from The Royal Regiment of Scotland (5 SCOTS) carried by a Chinook helicopter during the 16 Air Assault Brigade Exercise Joint Warrior at West Freugh Airfield, Stranraer, Scotland on Apr. 16. The Airborne Task Force (ABTF) used a combination of parachute, air assault and Tactical Air Landings (C130 Hercules) to seize and secure the airfield at West Freugh during the JW exercise that was supported by RAF tactical planes, Joint Helicopter Force’s Apache, Chinook, and RN Sea King as well as several US, French aircraft. 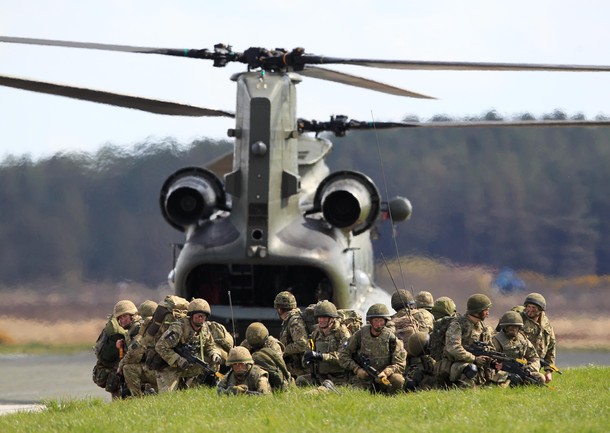 Below, a Colombian police chopper overflies Cartagena, Colombia, prior to the arrival of President Barack Obama and Colombia’s President Juan Manuel Santos for a land titling event for Afro-Colombian communities on Apr. 15. 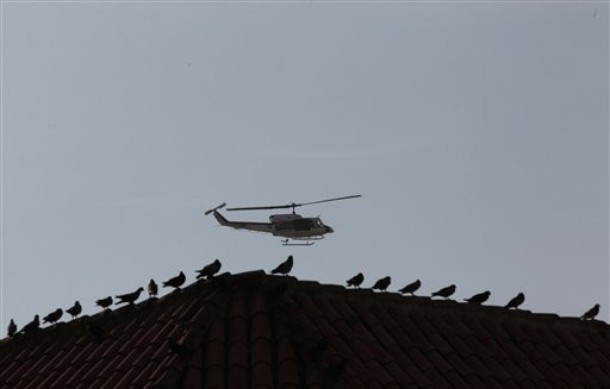 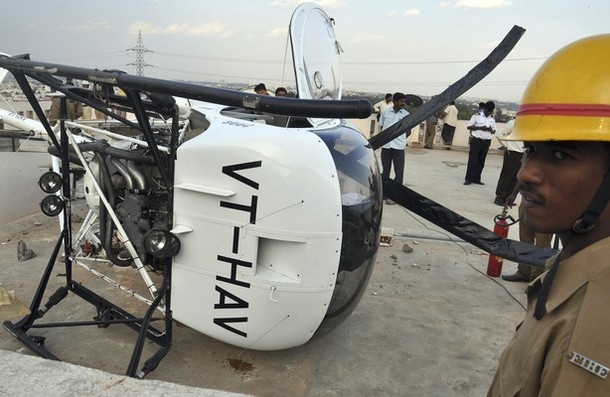 A view from inside a helicopter performing armed overwatch of Cartagena, Colombia, on Apr. 12 for the sixth Summit of the Americas. 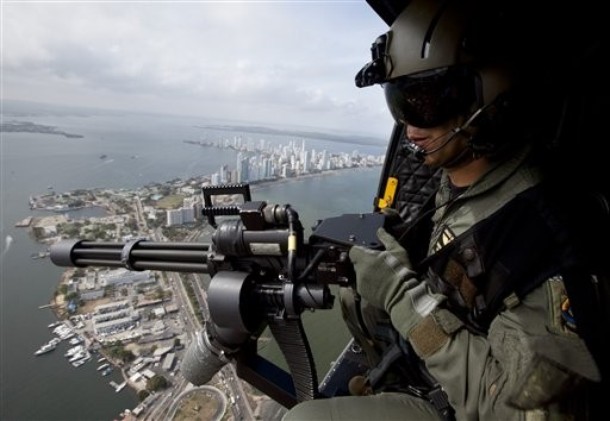 An Irish Coast Guard helicopter reaches Titanic Memorial Cruise ship MS Balmoral, in the Atlantic Ocean off Ireland on Apr 10, to perform a the medical evacuation of a man suffering from a heart ailment. The ship headed back 20 nautical miles towards Ireland in order to be in range for a helicopter tasked with evacuating a man with a non life threatening heart condition. 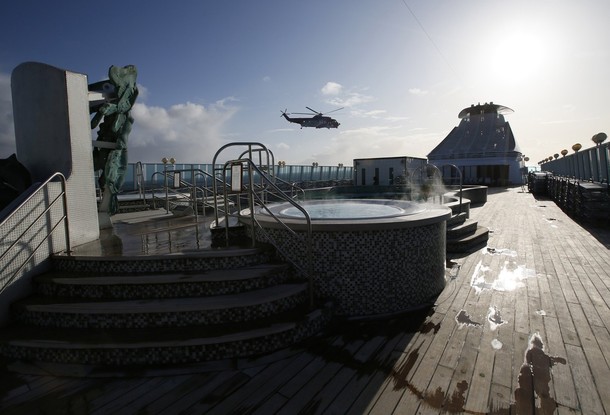 Barely visible on the upper part of the picture, a firefighting helicopter drops water to extinguish fire atop the Europe’s tallest-to-be tower under-construction which burns in central Moscow, late on Apr. 2. Located some 2 km west of the Kremlin, when completed, the tower will be 360 meters (1150 feet) tall. 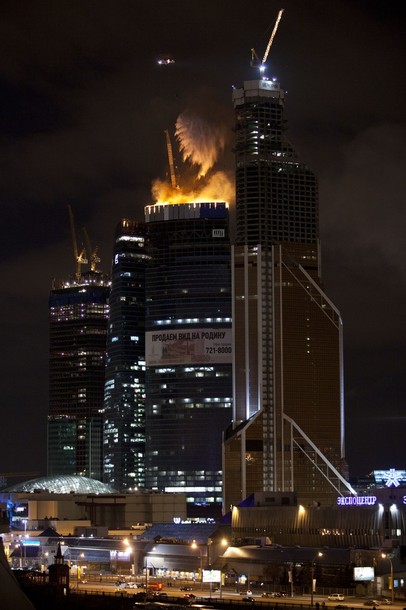 This may be one of the best helicopter footage you’ve ever seen! Shot at 5.7K/30FPS with an Insta360 ONE X camera by Air Force Rescue Pilot @jolly_pilot the video below will literally bring you inside […]