During the Cold War, such type of helicopter would have been shot down by a U.S. warship.

However, on Apr. 11, 2012, as the following picture shows, a Kamov Ka-31 helicopter belonging to the Indian Navy landed on the flight deck of the Ticonderoga-class guided-missile cruiser USS Bunker Hill (CG 52) during Malabar 2012, a regularly scheduled naval exercise conducted to advance multinational maritime relationships and mutual security issues. 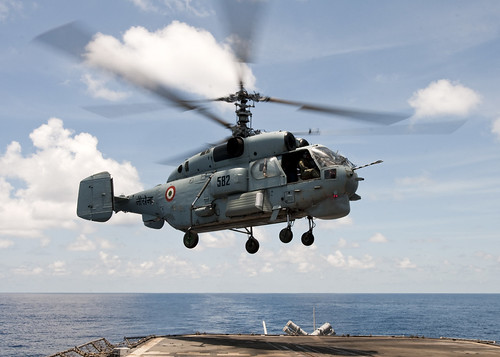 If you have an interest in Naval Aviation, you must have heard about Commander John “Bug” Roach. Few days ago, the Facebook page of the National Naval Aviation Museum posted an interesting edition of their […]

From Feb 7 to Feb 9, the Standing NATO Reponse Force Maritime Group 2 (SNMG2) made a port visit to Civitavecchia harbour. SNMG2 is a multinational, integrated maritime force composed of vessels from various allied […]