On Apr. 14, 2012, a USCG HC-130J Super Hercules attending a Titanic 100th Anniversary ceremony with a commeration flight, was diverted to coordinate a rescue operation of a French sailing vessel 1,300 miles east of Boston.

The rescue plane crew air-dropped supplies including a pump and hand-held radio to maintain communications.

According to the U.S. Coast Guard press release, First Coast Guard District Command Center watchstanders, based out of Boston, were notified at 7:30 a.m. by Rescue Coordination Center Gris Nez, in Normandy, France, that the 40-foot sailing vessel UBU 7’s rudder was leaking, but the boat was still buoyant.

A Spanish fishing vessel, the Generoso Tercero, was identified by the Coast Guard’s Super Hercules during the aircraft’s transit from St. John’s, Newfoundland, and diverted to rescue the sailors. All three sailors were succesfully rescued by the Spanish vessel with no injuries.

Another vessel, the Moscow Sea, a member of the Automated Mutual-Assistance Vessel Rescue (AMVER) System, will meet the fishing vessel and transfer the sailors aboard while the UBU 7 remains afloat as a potential hazard to navigation.

It’s at least amazing that some sailors were rescued on the 100th anniversary of the Titanic sinking by the AMVER systems created in the wake of the Titanic disaster, when passing ships had unintentionally sailed next to the cruise ship unaware of its collision.

By the way: Apr. 14 is not the best day of the year to set sail. At least every 12th year of each century… 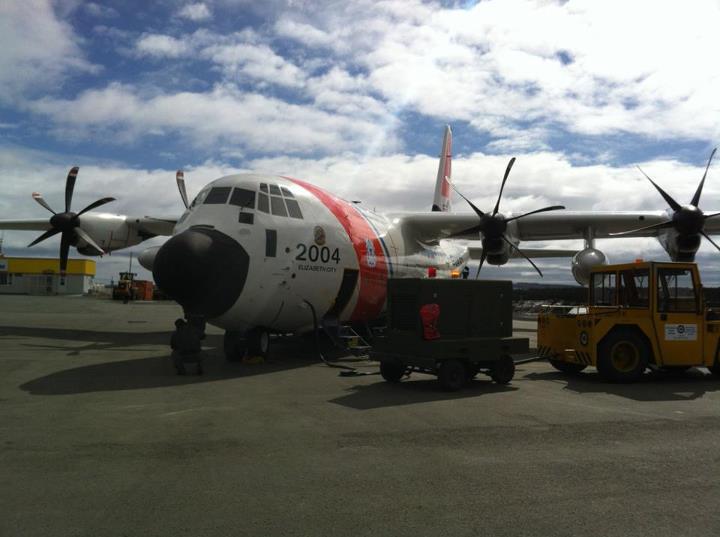 Badass clip shows how difficult HAAR can be. From the Pave Hawk pilot’s point of view. Shot at 2.7K SuperView with a GoPro Hero5 Session camera on an NVG mount, this is yet another cool […]

The following images were taken by Matteo Marianeschi during a recent visit in Luni Sarzana, airport where the 1° Nucleo Aereo, 1° Sezione Volo Elicotteri of the Guardia Costiera (CP, Italian Coast Guard) and the […]

This impressive photo of a U.S. Coast Guard C-130J clearly shows what wingtip vortices look like.