Many speculations and very few known facts surround the mysterious capture of the U.S. stealthy RQ-170 Sentinel drone in Iran. While the U.S. claim that the robot was lost as a consequence of a technical failure occurred during a spy mission from Afghanistan (the version that, backed by some local accounts, I consider now the most likely), Iran has always affirmed that the once secret UAS (Unmmanned Aerial System) was ambushed using a GPS-spoofing attack along with a complex cyber warfare operation that enabled its military to take over remote control of the Lockheed Martin robot.

Official statements aside, the only things we can be sure of are the images of the drone showcased in what looks like a gymnasium of a school, made available by Iran’s Revolutionary Guard website.

Whether you belong to the “party” of those who believe the drone is real or you think it is a fake, those pictures ,alongside the footage released by the State TV, are the only proof that the one in Iran is indeed the elusive ‘bot dubbed the “Beast of Kandahar”.

Many details can be discovered by analyzing the few available images that, at the same time, raise many more questions.

Bjørn Holst Jespersen is a Danish architect who has been following the developments of the saga of the Beast of Kandahar on this blog since the beginning. I’ve asked him to check if the gymnasium where the drone was showcased is compatible with the one pointed out a few days ago by a source as the location where the Sentinel was hidden.

Using perspective drawing techniques, by extending lines and establishing vanishing points to subdivide areas using diagonals, he has studied the photographs of the captured RQ-170 to determine both the building and drone size as well as the orientation of the gym.

Here is what he was able to ascertain from the images.

It seems the gym-space is 36-meter long (6×6 meter sections) and about 20-meter wide. The building/drone size is calculated on the basis of markings on the floor. “The assumptions that I have based the reconstruction on are that the circle in the middle is a standard centre circle for basketball, and that there are markings (white lines) for volleyball”  Bjørn says.

“Markings correspond and point to a constructive section being 600 cm centre to centre (this is established by extending the lines until they hit the wall) corresponding with standard size Iranian brick that I googled. This together makes a strong case for the length of the building: the bricks can be larger than standard, but that would make the 300 cm markings for volleyball too wide and also make the 360 cm diameter basketball centre circle too large” the Danish architect explains.

“The width of the building was harder to get a handle on but based on the same assumptions I don’t see the gym-space being more than 20-meter wide. With walls and overhang this would be about 22 meters…unless the court is placed asymmetrically(!).

By establishing the vertical sun-angle the solar-time (using this calculator) can be determined. This gives the compass-direction to the sun. By establishing the horizontal angle of the entering sun, the orientation of the building can be ascertained, giving an AM and a PM value.

“The drawing explains “which ray” I calculate. Since the lengths of the sides of the horizontal triangle is calculated from counting bricks, the brick size becomes irrelevant, but the counting could be wrong as could the estimated “entrance point” of the ray. Furthermore, the calculation is based on the end-wall leaving no gap behind the last steel frame. The further back the wall is, the more the horizontal angle will fit the building pointed out by the source.”

“The vertical solar angle is possibly lower than I have assumed due to 3 layer of bricks being 18 cm instead of 20 as I have used (have done some more googling since). This will set the time of day to 09.33 AM or 02.27 PM. If this is the case (and the horizontal angle is correct) the building pointed out by the source will be only 5 degrees off” Bjørn says.

According to Google Maps/Google Earth the size of the building identified by the source as the one where the drone is/was hidden is significantly bigger than that the architect has found (about 5 meters longer and some meters wider too).

However, as Bjørn says:  “I cannot entirely exclude that I have made some error or – less likely – that the building is larger than the gym-space. I cannot even say how precise the measuring on Google Maps is. But if the building only has the gym-space, and the measuring on Google Maps is precise I’m close to excluding it as the right location. The ratio of length vs width looks about right.

Dealing with the orientation of the tiped off building: “compared to my the sun-angle study it seems to be about 5 degrees off at AM. This is more than I would like to accept as a margin, but realistically, it is still quite possible. (PM is impossible unless photos are mirrored).”

The two reference figures inserted in the satellite images at the bottom are not exact in size, only in orientation. The tiped off location is still within the margin of error – even though close to falling outside. Both because of the orientation, but mainly because of the size which seem too big.

So, if the U.S. were studying a raid on this gymnasium near Kashmar to free their drone, maybe it’s better they reconsider it…. :-) 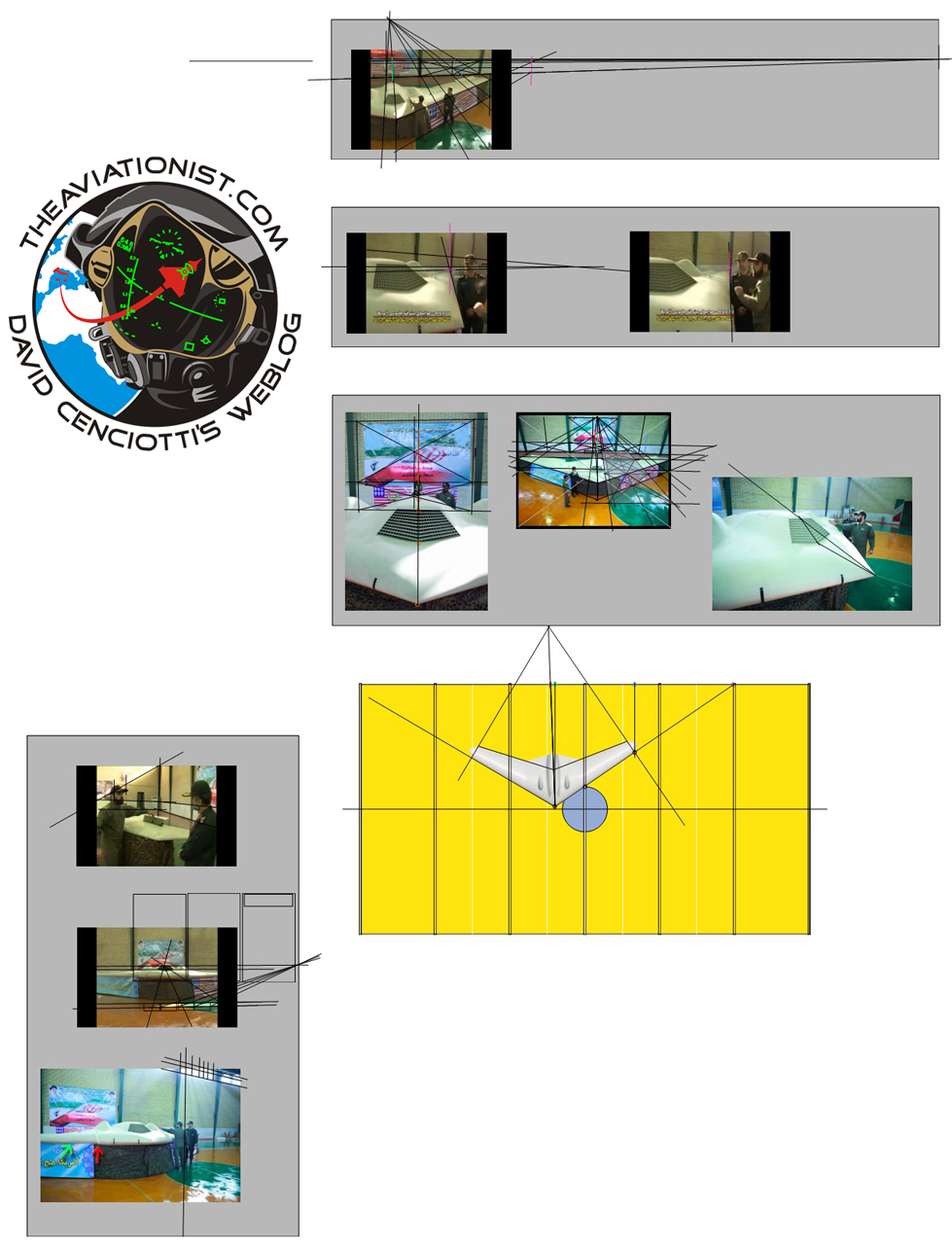 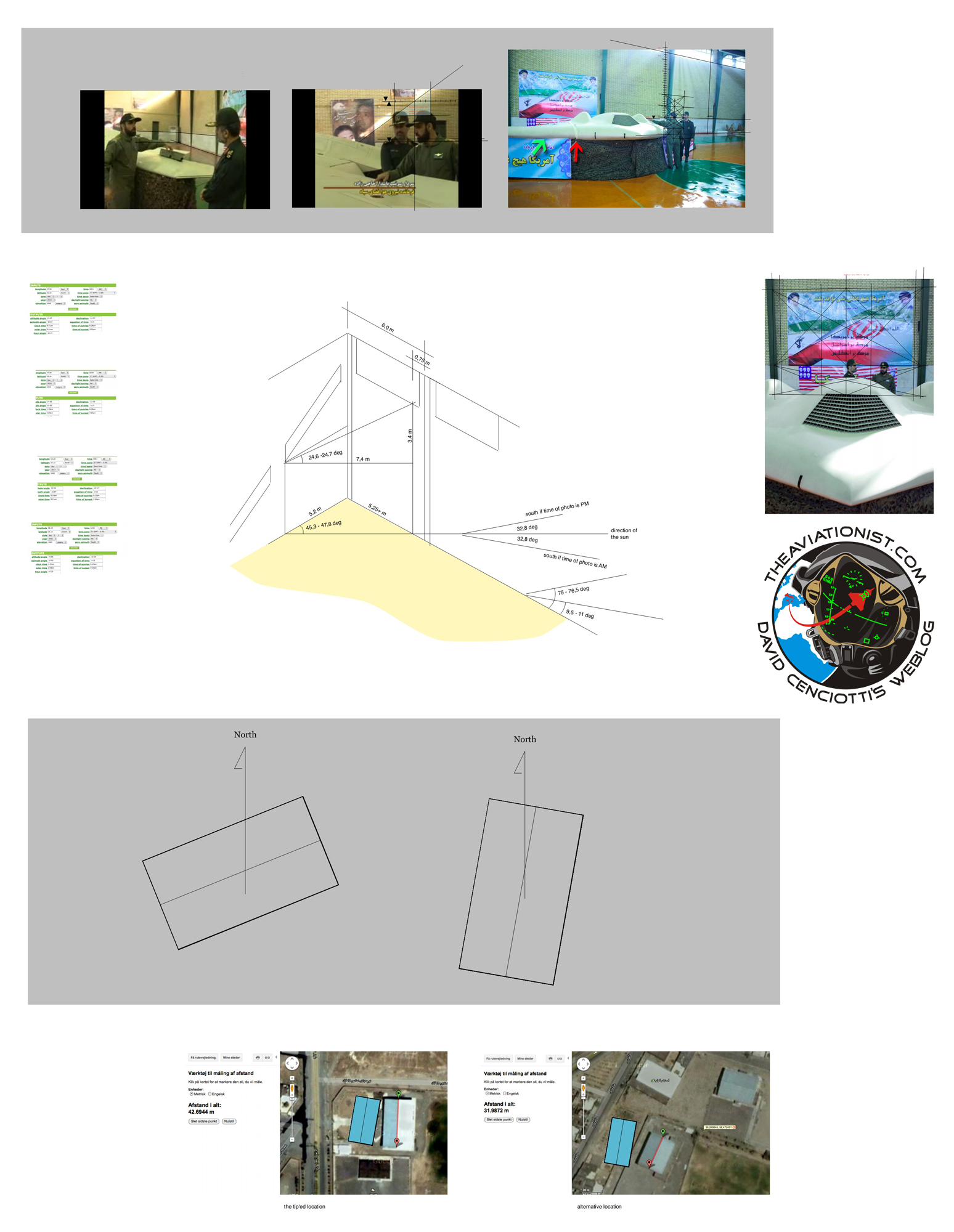 China Has Emerged as a Preeminent Global Strategic Super Power: What Does It Mean? During the past five years China’s defense programs have not accelerated, they have increased by multiples into segments the Chinese had […]

The deliveries were halted when a Chinese alloy was found in the F-35’s turbomachine pumps. About a month after they were halted, the U.S. Under Secretary of Defense for Acquisition and Sustainment, Dr. William LaPlante, […]