The amout of contribution I receive each time I publish a blog post on the stealth drone now part of Iran’s asset is amazing. For instance, yesterday, few minutes after publishing the Infographic that I used to explain how the drone was captured (a theory based on the known facts to date), I got an email from Dave Krakow with an interesting drawing he sent me to show how the mysterious hatch on the top of the RQ-170 Sentinel, it’s not up to the typical American Aerospace standards. “The details are imprecise, nothing like Lockheed Martin products.” 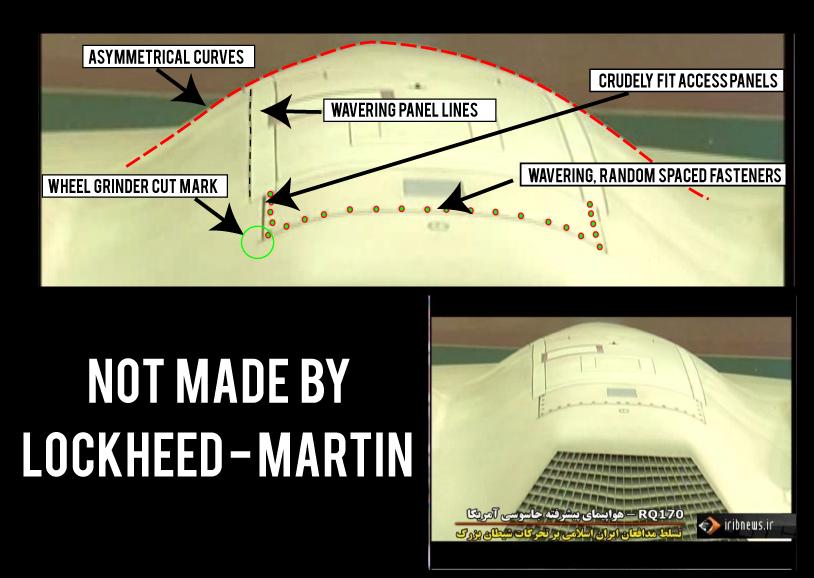 Dave believes the thing shown by Iranians was possibly constructed previously, for radar signature research, with details added in a hurry for cameras. “A lot of the commentary on the web regarding general accuracy assumes Iranian intelligence has only the same photos we have on the internet, and thus they could only know certain details if they had an original.  I don’t think this is a reasonable assumption” he wrote to me.

For sure, as highlighted in the above image, the mysterious “top hatch” (that I supposed could be used to deploy a recovery chute) features some oddities. Some of them in particular, raise questions. However the angle of the camera, the effect of the zoom, and many other contributing factors (lights, shadows, image compression etc) may have affected the quality of the footage shown on Iran State TV rendering, for example, fasteners seemingly randomly spaced.

Furthermore, there’s still a chance that Iranians worked on the Sentinel after they recovered it: maybe they tried to get access to the internal hardware, removed panels to inspect lenses, memories to look for interesting data or to disable any self-destruction mechanisms or Emergency Locator-like systems, in order to prevent the Americans from locating or destroying it.

Nevertheless, we can’t rule out the possibility that the one showcased in what looked like a school in Kashmar was actually obtained by melting pieces belonging to various wrecked Sentinels that Iran has downed in the past, even if this would imply that the U.S. have already lost two or more “Beast of Kandahar” robots in Iran! By the way, Iran has recently announced it will show the remains of three U.S. and four Israeli drones downed in the last years while spying on Iran’s nuclear program.

Someone argued that a deployed recovery chute would have confirmation only if hatch doors were opened but I’ve already given a possible explaination for the fact that they were closed.

Someone suggested the drone is too clean for a crash landing, however, if a recovery chute made its crash landing soft, I would expect a damaged belly, as the hidden bottom of the drone seems to confirm.

This, along with all the previous articles on the Sentinel drone in Iran, can be found at the following link (click and scroll down): https://theaviationist.com/category/captured-stealth-drone/
About David Cenciotti
WebsiteFacebookTwitterLinkedIn instagram
David Cenciotti is a journalist based in Rome, Italy. He is the Founder and Editor of “The Aviationist”, one of the world’s most famous and read military aviation blogs. Since 1996, he has written for major worldwide magazines, including Air Forces Monthly, Combat Aircraft, and many others, covering aviation, defense, war, industry, intelligence, crime and cyberwar. He has reported from the U.S., Europe, Australia and Syria, and flown several combat planes with different air forces. He is a former 2nd Lt. of the Italian Air Force, a private pilot and a graduate in Computer Engineering. He has written five books and contributed to many more ones.

In August last year we analyzed the reasons for the possible Polish purchase of the Lockheed Martin AGM-158 Joint Air-to-Surface Stand-off Missiles (JASSM). Now, in the light of the Ukrainian crisis, a contextual change has […]

The F-35 Lightning II Will Get A New Radar

The new APG-85 radar will replace the older APG-81 on the upcoming Block 4 fighters. Last year, the U.S. Air Force’s unfunded wish list for Fiscal Year 2023 mentioned the procurement of seven F-35A in […]