As some U-2 spyplanes are landing in RAF Fairford on their way to some Middle East forward operating base (to undertake some reconnaissance missions over Iran, replacing the RQ-170 drone?), let’s have a closer look at the high-resolution pictures I published yesterday.

First of all, let me tell you that I believe the one showed by the Iranian Republican Guards is not a fake. Even if, as I will explain, there are still some details quite difficult to explain, the main reasons why I believe that is the actual drone “lost” during a reconnaissance mission are:

First it’s extremely accurate. Considering the small amount of details previously known, I don’t think Iran could be able to create a mock up in such a short time. The news of the downed drone came from Iran and it was later confirmed by U.S. sources (even if details differ). If news had spread in the opposite direction probability of an off-the-shelf 1:1 model made available for cameras would have been higher

Second if it were a fake or reproduction, why would Iran give it this desert/beige scheme when previous pics showed a (dark) grey scheme?

Now, what do pictures tell us about the downed drone?

I’m not an intelligence officer nor a professional photo analyst but with the help of the several thousand visitors of this website (and in particular “CalebS”) that commented the previous posts or sent me emails, I think I’m able to identify some noteworthy details, deliberately ignoring considerations about the actual drone shape.

1) the robot is stored in a sort of gym. For sure it is not a hangar or aircraft recovery shelter. Floors are polished wood with a painted circle that seems to be in the center of the room. If that is true is raises some interesting questions such as the (visible) doors are not big enough to get the plane in. Especially when you consider the size of the room and the size of the
main door in the photo. Furthermore:
a. The windows in the top of photo 3-2 have steel wire protecting them
b. Seats of some sort in the bottom of 3-2
c. Complete lack of security except for the 2 guys and the camera man
d. Several speakers on the wall

2) There are signs of water or clear liquid on the floor which is both extremely interesting and weird.
3) The most interesting thing is there are bits of foam on the floor and camo net that I have highlighted (see point 4 below)
4) Wing damage on the right wing (left side of 3-2) looks like it was seriously damaged/separated from the fuselage yet the damage looks more like the wing was cut off (to get in the building or transport it after recovery?) then a crashand shear. Too clean. Another possibility is that some parts of the drone are . As pointed out by a visitor if you look at photo “3″ and the banner on the starboard side wing: looks like the banner is “pinned” to the wing as if the wing is made of foam.
5) Probably, the bottom of the airframe is carefully hidden because the drone was seriously damaged as a consequence of the crash landing. Why did the Iranians want to cover it? Maybe because the type of damage would be coherent with a belly landing, without an extended undercarriage. This would prove that the drone was not remotely controlled by Iranian operators that have been able to disrupt the satellite link and guide it to a “safe” landing. On the other side, a completely uncontrolled landing would have had more evident effects on the airframe. 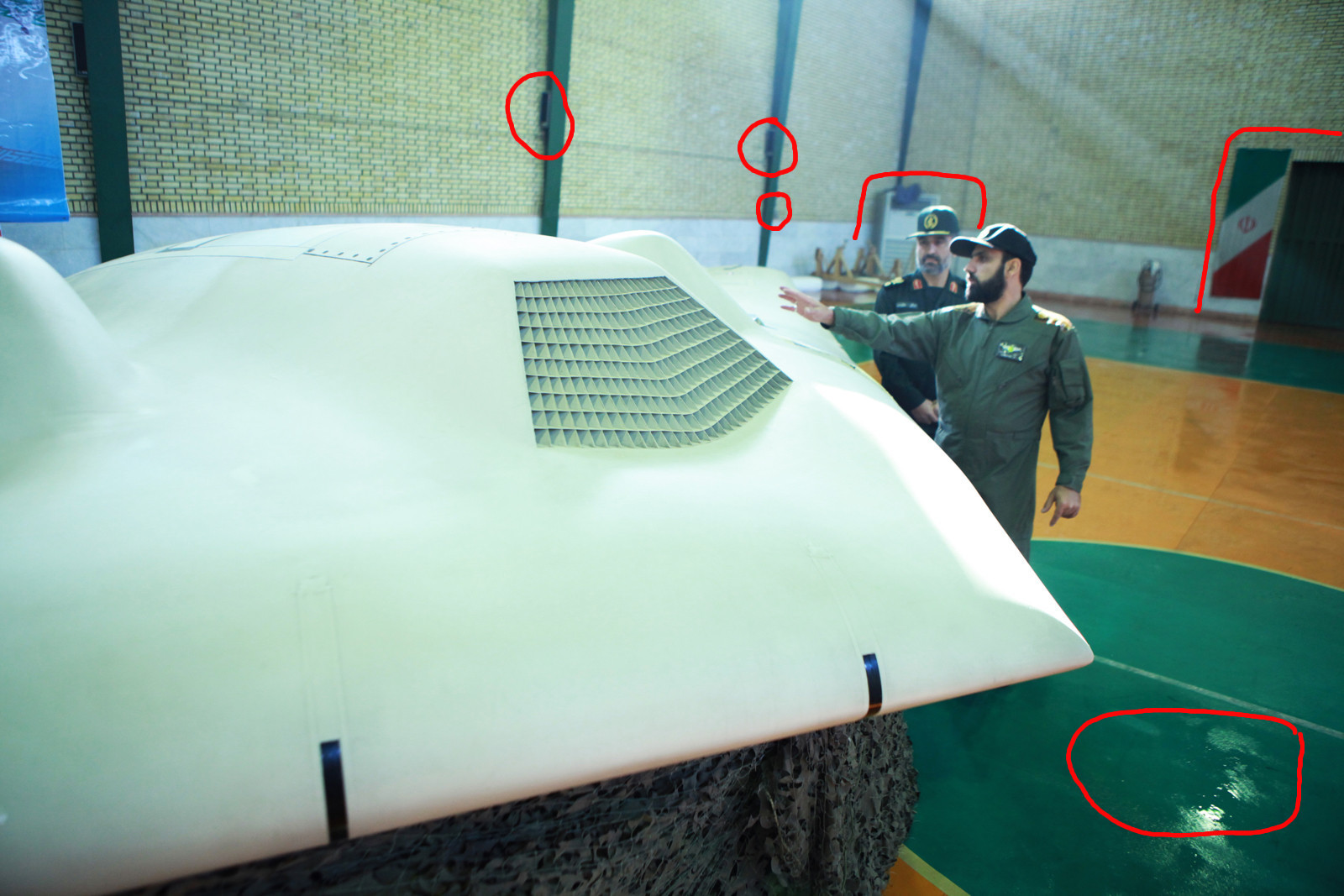 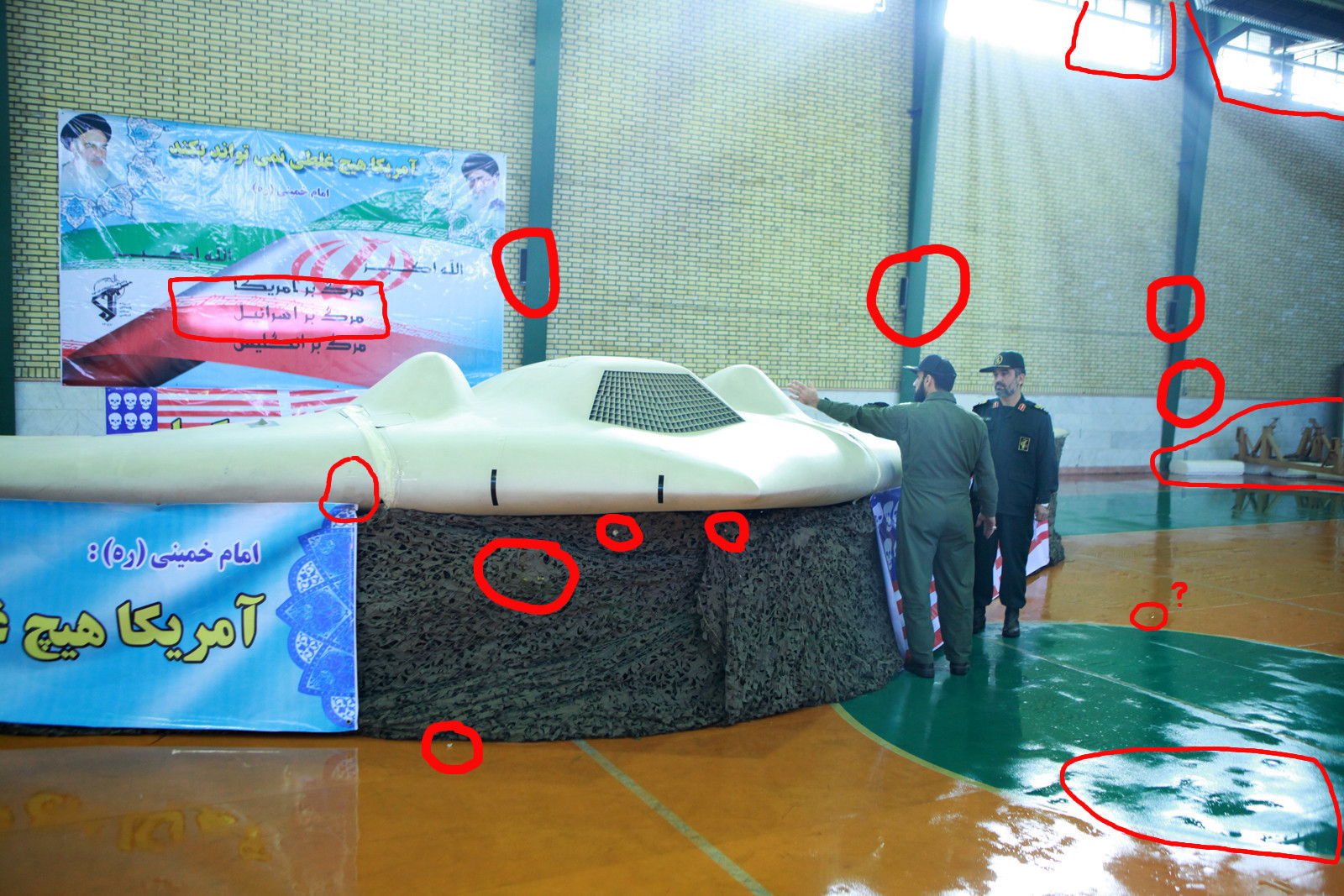 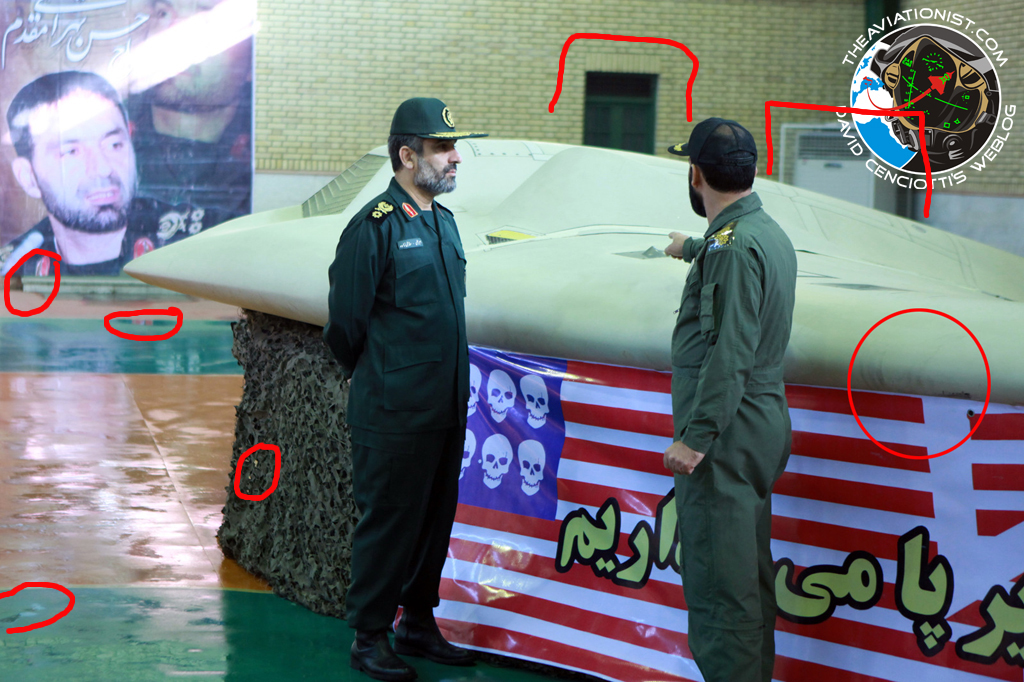 Quite likely, as soon as the Iranians found the drone, before any U.S. could find it to secure and blow it up, they may had cut the wings off to transport it as quickly as possible to a safe location, hidden from spy-sats. Maybe they had to remove some any self-destruction mechanism or GPS tracking system. They studied the inside of the drone to find out some details about its cameras, communication suite, storage capability, etc. and then repaired and prepared it to show it to the public.

There’s one last possibility (let’s say an American “hope”): the drone is real but it was deliberately sent and made crash in Iran as a sort of trojan horse, carrying malware or other Stuxnet-like viruses. A bit far fetched but intriguing.

This, along with all the previous articles on the Sentinel drone in Iran, can be found with the following link: https://theaviationist.com/category/captured-stealth-drone/

Artist Ugo Crisponi has sent me the following image he created after noticing that almost all artworks and renderings available to date have a minor flaw: the nose of the drone is drawn as convex with the two sections of the fuselage forming a pyramid section. However, as one of the previously available images taken at Kandahar shows, the actual nose is concave. 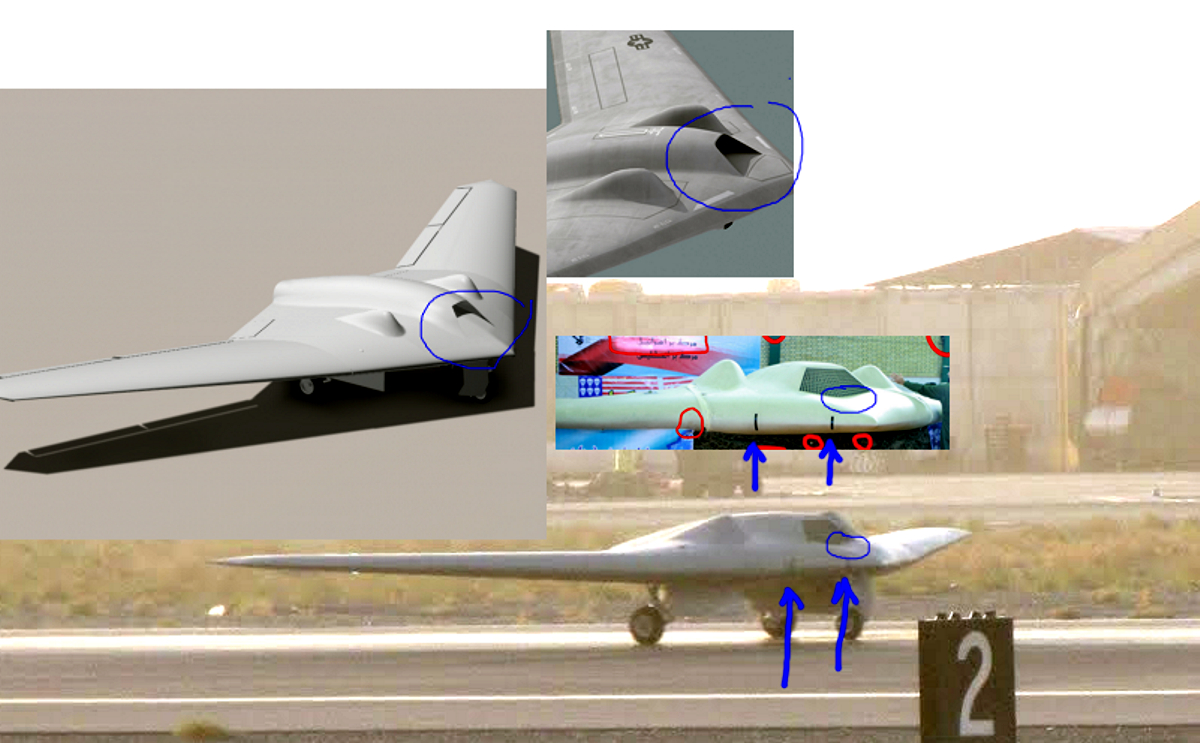 U.S. Army Special Operations MQ-1C drone has crashed in Iraq. And someone took a selfie with the wreck