Even if the story that the U.S. stealthy RQ-170 Sentinel drone captured by Iran was hijacked using a GPS spoofing attack is based on known facts and vulnerabilities highlighted in Air Force official documents, the “ambush”, as detailed by an Iranian Electronic Warfare engineer to the Christian Science Monitor, contains some controversial points.

First of all,  the lost-link procedure does not foresse the RQ-170 landing autonomously at his actual homebase (because of the many variables, such as wind and traffic) but orbiting until link is re-established or the drone runs out of fuel.

For instance, even under Remote Split Operations, landing is performed in Line Of Sight by the local ground control station: latency induced by the SATCOM link is not compatible with the last phases of the flight when immediate reactions of the robot’s control surfaces to the inputs given remotely by the pilot are required to safely bring the drone on the ground.

Furthermore, provided that the autolanding is used in the lost-link events, it is not that easy to land the drone on a different landing field than its homebase without causing major damages.

Finally, it seems quite weird that any insider so proud to have achieved a hack of the most secret U.S. unmanned aerial system (UAS) could be at the same time so uncautious to give the details of the entire operation to the public domain, with the first and most obvious consequence of not being able to repeat it in the future. Unless, the type of attack they have described is all but unexpected but very well known because highlighted in the above mentioned official documents.

So, I’ve asked once again my friend Ugo Crisponi to put on a nice infographic what I think may have happened on Dec. 4, 2011, when the drone was “downed”, based on all the details I was able to collect so far. 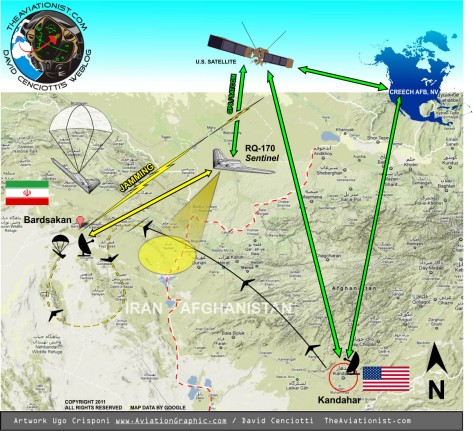 I think the drone’s link with Creech AFB was disrupted using jamming. How did the Iranians know the “Beast of Kandahar” was in the vicinity if they couldn’t see it on the radar? They may have intensified jamming around uranium enrichment sites.

Serbians were able to shot down the F-117 because during the Allied Force planners put the F117s on repetitive routings. Stealth planes are not invisible. They are extremely difficult to see, if you don’t know where they are and you are not close enough to track them. Maybe something similar happened in Iran.

I think that Iran played a role in the crash landing simply because they were able to recover it. If they hadn’t known where the drone had landed they would not have been able to get their hands on it.

Once the link was lost, as per procedure, the drone started an series of racetracks/orbits waiting for the signal to be re-established. In this phase, maybe the Iranians were able to spoof the onboard GPS and guide the drone in the wrong direction. Nevertheless this would mean that the most important American drone relies only on the GPS for navigational purposes and doesn’t use an INS (Inertial Navigation System) platform. Indeed even some GPS-guided bombs as the JDAM (Joint Direct Attack Munition) use anti-jamming and anti-GPS spoofing systems, some of those are based on simple inertial measurement units.

Then, when the Sentinel ran out of fuel, it crashed. Even though it was not mentioned before, there’s a possibility that the drone survived the impact because it was equipped with a safety chute. In fact, I’ve noticed a mysterious hatch on the top of the RQ-170, that, among other things could host the parachute used to safe the precious drone.

It’s obviously a speculation because such a chute could safe the airframe but could also preserve it for the enemy when the drone runs out of fuel during a mission behind the enemy lines. As happened in Iran.

Look at the following video.

A photograph of an Israeli Air Force F-35 flying (more or less..) “over” Beirut has been made public. Interestingly, the image seems to prove the stealthy aircraft was flying with radar reflectors. As reported yesterday, […]

Quadrotor killer drone with machine gun and self-destruct module: a deadly weapon of the future

First of all let’s have a look at the following increble video. It shows a mini quadrotor drone carrying a machine gun in order to bring remote-controlled death from above. The prototype drone, performs a […]