A suit designed to protect the pilot from chemical and biological agents has been recently tested by the U.S. Air Force.

The test came after a decade of planning and flight gear system design and build-up testing.

According to the U.S. Air Force, “the chemical/biological ensemble consists of a special CB suit, a Joint Service Aircrew Mask used for the F-35, a pilot-mounted CB air filter, CB socks and gloves double taped at the wrists. The ensemble also features a filtered air blower that protects the pilot from CB contamination while walking to the jet. It provides both breathing air and demist air, which goes to the pilot’s mask and goggles. All components of the CB ensemble are in addition to the pilot’s sleeved flight jacket and G suit.”

The ensemble also includes a communication system that allows the pilot can speak to life support personnel while wearing the ensemble with helmet and mask.

“It is a conversational communication unit, which is a box that integrates with the communication system so that when he speaks into his mask it lets people hear the pilot talk… it makes him sound like Darth Vader,” said Darren Cole, 461st FLTS Human Systems Integration lead.

The suit is designed to keep the CB agents out when the 5th generation multi-role aircraft fights in Weapons of Mass Destruction-infested environment. 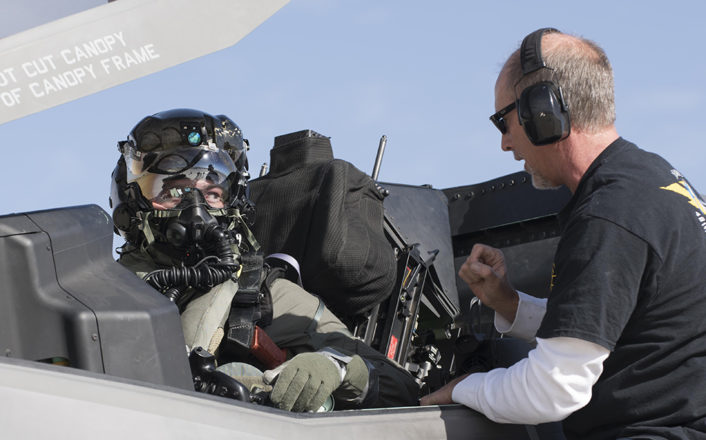 An F-35B on loan from Marine Corps Air Station Yuma, Arizona was used for the tests, that started on Jan. 6 with Marine Corps test pilots Maj. Aaron Frey and Maj. Douglas Rosenstock from the 461st FLTS who donned the CB ensemble for the first tests.

They opted for the STOVL (Short Take Off Vertical Landing) variant of the JSF because it’s the most complex: “We purposely chose the Marine [short takeoff, vertical landing] version of the F-35 because the equipment is more complicated and basically has more nooks and crannies for the contaminant to hide in. This aircraft also has full-up mission systems. These tests will demonstrate that the U.S. and partner nations can fly, fight, and win in a CB threat environment and then quickly decontaminate the aircraft and return it to normal operation.”

Here’s how the tests were conducted:

“The first pilot stepped to a clean jet in the CB ensemble and we contaminated it using a simulated agent. The engine run pulls in the simulant so we need to make sure the air is filtered before it gets to the pilot. First, the air goes through the [On-Board Oxygen Generation System] and then the pilot-mounted CB filter to remove any remaining contaminants. There is another filtered air supply blower that provides cooling and demist air to the pilot’s hood and goggles. We also used three air sampling devices to be sure all the air provided to the pilot was clean.”

“After the ground test, a second pilot came out to simulate stepping to a “dirty jet.” He conducted an engine startup and then took off on a flight. Both pilots wore passive absorption devices on their bodies that the simulated contaminant would stick to if it made it through the CB ensemble. Data was taken from both pilots to see if anything was different from the separate startup scenarios.”

According to the flying branch, this was the only time this specific flight gear was flown in the JSF and is the first ever simulated contaminated aircraft flown for this kind of data collection.

“Among the data we’re collecting is how much thermal stress is added to the pilot with the CB ensemble on and the impact the additional gear may have on flying the aircraft,” Cole said

It would be interesting to know whether the flight suit for Chemical and Biological Warfare affects the pilot’s ability to see the aerial threats surrounding him, especially considering that the out-of-cockpit visibility in the F-35 is less than other Air Force fighter aircraft because of the large head rest that impede rear visibility and the ability of the pilot to check the aircraft’s 6 o’clock for incoming aerial or surface threats.

Actually, the F-35 pilots might not need to look around too thanks to the AN/AAQ-37 Distributed Aperture System (DAS) that combined to the AN/APG-81 active electronically scanned array (AESA) radar provide them a 360-degree, spherical situational awareness that seems to have been more than enough to take care of the Aggressors’ 4th generation F-16s during the recent Red Flag exercise...

Anyway, NBC gear is usually cumbersome, difficult to dress and pretty uncomfortable. This Author has had the opportunity to take part in an NBC training with the Italian Air Force some years ago and what the drills highlighted is that operations with protective gear and gloves, with the body completely encapsulated and inherent communication difficulties, requires strict adherence with the procedures and much practice.

Otherwise, the risk is to be exposed to contamination. 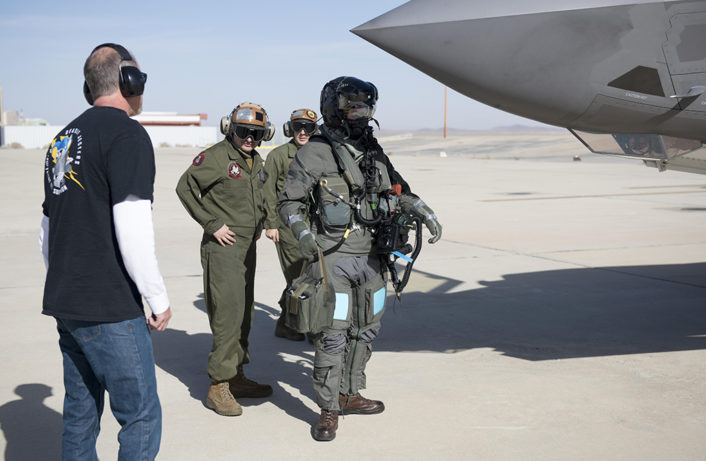