A “Bone” deployed to Guam has taken part in Close Air Support training with Royal Australian Air Force near Australia for the first time in at least a decade.

Indeed, their role is to act as a sort of “broker” between the commander of the troops on the ground and the pilot, working embedded on a patrol, in the vicinity of the enemy, in an armored vehicle, or from the Tactical Operations Center of a Forward Operating Base.

Through the  ROVER (Remote Operations Video Enhanced Receiver) system made available by the pods carried by several aircraft (such as the Advanced Targeting Forward Looking Infrared – ATFLIR – pod that the F-18s carry on the left side of the fuselage or the Sniper pod in case of the B-1), the JTACs are able to receive realtime footage from above on a portable terminal similar to a Playstation. Such live video streaming is used to determine whether the pilot is cueing the weapons to the correct ground target (and avoid friendly fire or collateral damage).

B-1s have already proved to be able to support ROVER Internet Protocol Network, or RIPN, project, in September 2013 when they were able to form a network through the Lancer’s Sniper pod to several ROVERs on the ground, effectively allowing them to pass digital close air support targeting coordinates or sensor points of interest to the B-1 crew.

According to the U.S. Air Force, this was the first time in at least 10 years that B-1s have conducted close air support training in the vicinity of Australia.

The B-1B is part of Pacific Air Force’s CBP (Continuous Bomber Presence) mission to Guam, where the aircraft, belonging to the 28th Bomb Wing deployed on Aug. 6, 2016 to replace the B-52 (and deter North Korea and China.)

CAS are among the most frequent missions flown by the “Bones” against ISIS during their 6-month deployment in support of Operation Inherent Resolve last year: when they returned stateside in January 2016, the B-1s had flown 490 sorties dropping 3,800 munitions on 3,700 targets. 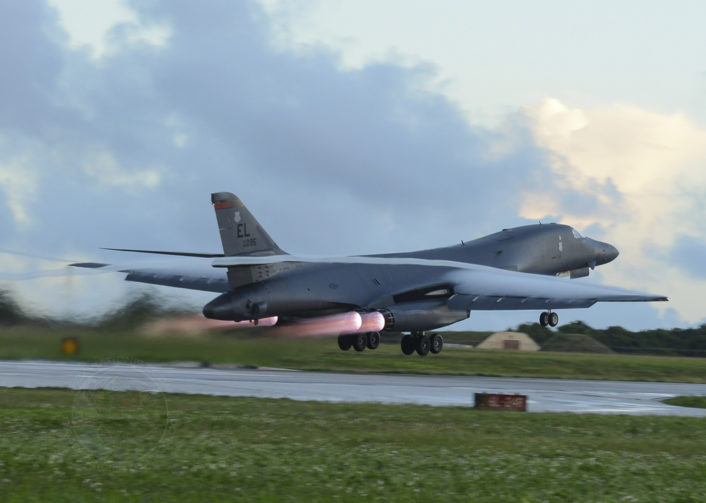