Iran has unveiled a new UCAV based on the captured American RQ-170 stealth drone.

Belonging to the Simorgh class, the new drone is a long-range unmanned aerial vehicle capable of carrying four precision-guided bombs, modeled on the American RQ-170 Sentinel stealth drone captured in 2011.

Commenting on the latest achievements by the IRGC forces, Commander of the IRGC’s Aerospace Division Brigadier General Amirali Hajizadeh said that “today Iran has better aviation systems and equipment than the US and expressed hope that one day Iran will have the same might in the UAV industry as in the missile sector.”

Watch the Iranian version of the US RQ-170 Sentinel stealth aircraft pic.twitter.com/eWxKwXrt45

So, it looks like the Iranians have not only copied the RQ-170, but they have also developed something new based on the captured “Beast of Kandahar” whose crash landing in Iran remains a mystery. A sensibly smaller drone that retains the same wing shape as the Sentinel but lacks the frontal air intake of the Lockheed Martin’s stealth drone.

Moreover it’s not clear where does the landing gear (if any) comes out from. 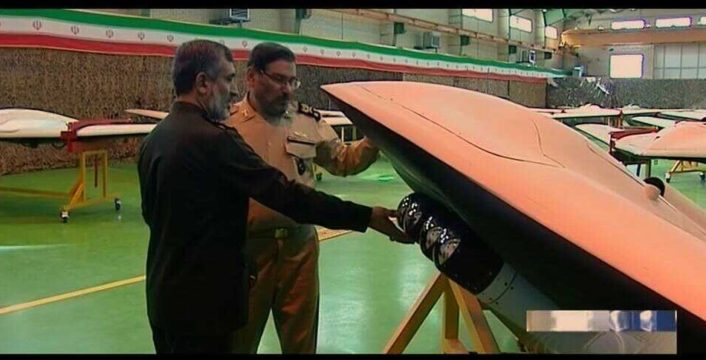 As widely reported on The Aviationist since 2011, there are various theories about it.

Tehran claims it was hacked, but the stealth drone, undetected by any radar, might have crash landed for a failure somewhere in eastern Iran where it was found (and where the U.S. could not blow it up.)

This Author still believes that the most likely theory is that the stealth drone, undetected by radar, crash landed in an uninhabited area in the Iranian desert for an unknown failure.

At the beginning, the U.S. decided not to disclose the news because the robot might have crashed in the mountains, where no one would ever find it, or have suffered extensive damage that would make it useless in the hands of the Iranian analysts. And, by giving the news, they would have admitted they had undertaken spy missions inside the Iranian airspace, thus confirming they had joined Israel in the covert war on the Iranian nuclear program.

However, a shepherd found it almost intact and the news spreads, forcing the U.S. to admit the loss. Iran was given a great, unexpected opportunity to show it to the world and to make some propaganda “advertising” some of their (existing) capabilities in the Electronic and Cyber Warfare fields.

Needless to say, this is just one of the many scenarios drawn since the drone’s first pictures appeared on Iran’s State TV depicting the “Beast of Kandahar” in a school’s gymnasium: a scenario that does not involve any jamming, GPS spoofing, satellite-link encryption breaking and control link spoofing. In fact, whilst Iranians have surely shown skills and know-how in these fields, some theories about taking over of a UAV by means of jamming and hacking *seem* to be a bit far-fetched in spite of known vulnerabilities affecting U.S. drones.

Iran has hunted/recovered two more UAV types since 2011: two RQ-11s and at least one ScanEagle that had penetrated the Iranian airspace from the Persian Gulf.

Anyway, in February 2013 Iran released footage that proved it has, if not literally decoded, at least accessed some of the data stored inside the U.S. stealthy RQ-170 drone captured in December 2011.

A video filmed by the Sentinel clearly showed footage recorded by the drone’s underbelly camera: the area surrounding Kandahar airfield (KAF) during landing; a small building (possibly being spied); a C-130 and at least one Reaper drone among shelters at KAF.

Hence, the drone’s internal memories still contained some useful information and were not fully automatically erased as a consequence of the loss of control procedure. To such an extent some data, including video recordings from the drone’s FLIR turret, was recovered.

On May 11, 2014 Iran unveiled a copy of the Sentinel UAV drone allegedly manufactured by reverse-engineering of the Lockheed Martin RQ-170 captured in December 2011. The Iranian version of the Sentinel drone was displayed next to the original one.

On Nov. 10, 2014, Commander of the Islamic Revolution Guards Corps (IRGC) Aerospace Force, Brigadier General Amir Ali Hajizadeh, announced that a domestic version of the RQ-170 drone, modified to carry out both bombing and reconnaissance missions, had made its maiden flight.

A video showing the copy of the Sentinel flying somewhere over Iran, filmed both from the ground and from an accompanying helicopter was released.

The photographs emerged on Oct. 1, 2016, show that the Iranians have modeled a new UCAV on the famous stealthy RQ-170 captured in 2011. What’s next? 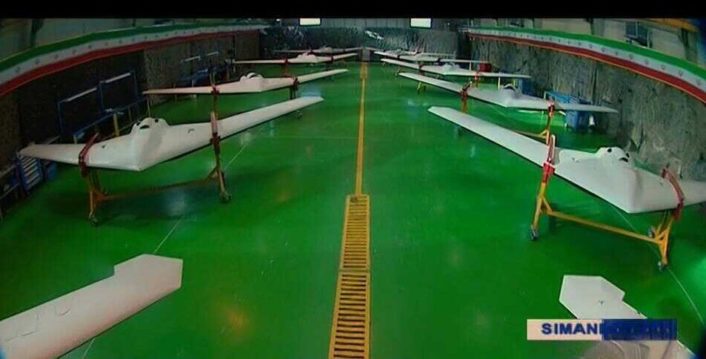 Photo: How to launch an RQ-11B man-portable Raven drone

Published by AFRICOM’s Flickr photostream this interesting picture shows how an RQ-11B Raven mini-drone should be launched. According to the caption, the demonstration was provided by Lance Cpl. Richard Hager, an intelligence analyst with Battalion […]

The Turkish Air Force has shot down an unidentified drone in Turkish airspace. Known and unknown facts.