Some glorious photos of two nuclear-capable Blackjacks flying off Scotland.

Russian Air Force Tu-160 Blackjack bombers are continuing flying long-range missions (for training or operative purposes) along the Atlantic route becoming more frequent visitors of airspaces near NATO countries in northern Europe than they were in the recent past.

Two such nuclear-capable bombers, flying in international airspace, were intercepted and escorted by RAF Typhoons  in QRA (Quick Reaction Alert) during a long-range sortie on Sept. 22.

Two RAF Typhoons at RAF Lossiemouth (callsign Y5R11 and Y5R12) were launched to intercept and escort the Blackjacks as they “skirted” the British Isles heading southwest. The interceptors were supported by a Voyager tanker launched from RAF Brize Norton and E-3D AWACS from RAF Waddington. The “Lossie” Typhoons handed over the two “zombies” to the southern QRA from RAF Coningsby.

It’s not clear where the Tu-160s flew after they flew close to the British Isles but they were probably taken on charge by other interceptors scrambled from nearby NATO countries. 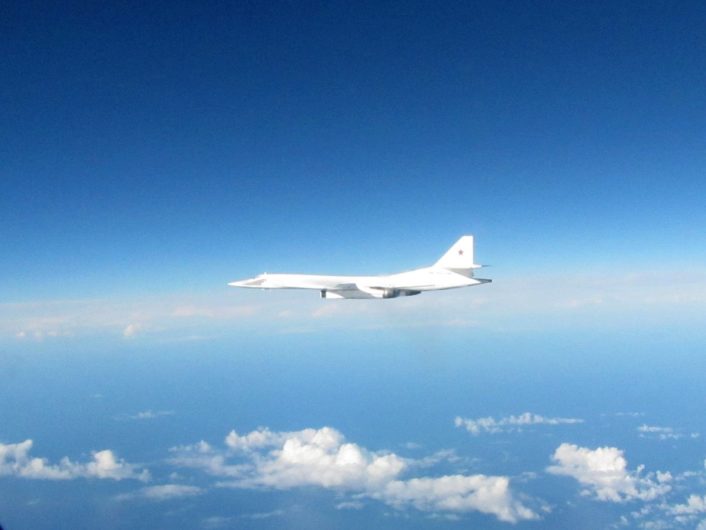 On Nov. 19 and 20, 2015, two Tu-160 Blackjack strategic bombers from Olenegorsk airbase skirted the airspaces of Norway and the UK (being escorted by several fighter aircraft along the route) flew over the Atlantic until Gibraltair, entered the Mediterranean sea, attacked targets in Syria with cruise missiles, and returned to Russia flying along the eastern corridor (over Iraq, Iran, Caspian Sea).

A new clip from the cockpit again shows Russian Aerospace Forces attack helicopters turned into airborne MRLS and using unguided rockets, in a quite indiscriminate way. Few weeks ago we reported about a video coming […]

On Feb. 8, the Japan’s Air Self-Defense Force (JASDF) had to scramble fighter jets to intercept multiple Russian military planes flying near Japan. Five Russian planes flew over the Pacific Ocean and the Sea of […]

Has Dassault won a 60 jet deal with the UAE? French newspaper La Tribune reported on Feb. 2, 2012, that France could be on the verge of winning a long-awaited $10billion 60 jet deal with […]